Tina Fey and Jimmy Fallon made their return to Weekend Update on Saturday Night Live this weekend — but this time, as guests: The two former anchors played undecided voters Denise McDonough (Fey) and Doreen Troilo (Fallon), who have plenty of thoughts on the presidential candidates.

While Denise maintains that she’s torn between nominees, she accuses Doreen of loving Trump — a reference to Fallon’s recent interview with the GOP nominee, when the Tonight Show host was criticized for keeping the conversation too light.

“I don’t love Trump,” Fallon’s Doreen responds. Denise doesn’t let her off easy though: “Well, stop acting like you do. Everyone thinks you love Trump. You’re always like, ‘Oh, his hair is real!’ she says, referring to Fallon playing with Trump’s hair on the episode in question.

From there, the two go on to insult Hillary Clinton — “She also called people a basket of deplorables, and that’s not a phrase,” Doreen claims — and vice presidential nominee Mike Pence. “He seems normal because he’s next to Trump. He’s really Biff from Back to the Future,” Denise explains, name-dropping the fictional villain that Back to the Future 2 screenwriter Bob Gale has actually said was inspired by Trump.

For more of Denise and Doreen’s political opinions, watch the full sketch. 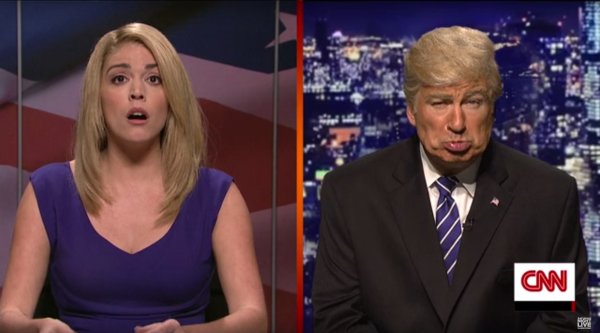