It’s a crucial time for Donald Trump to start courting the woman vote in earnest, but the last way he’s going to achieve that is to “grab them by the p—y.”

On Friday afternoon, the Washington Post published a 2005 recording of Trump talking to Billy Bush of “Access Hollywood” on his way to film a cameo on “Days of Our Lives”—and its contents are nausea-inducing. When he sees actress Arianne Zucker, he completely forgets about consent.

“I’ve gotta use some tic tacs, just in case I start kissing her,” Trump said on the recording. “You know I’m automatically attracted to beautiful—I just start kissing them. It’s like a magnet. Just kiss. I don’t even wait.”

Trump responded in a statement, attempting to shift the focus on Bill Clinton. “This was locker room banter, a private conversation that took place many years ago,” he said. “Bill Clinton has said far worse to me on the golf course—not even close. I apologize if anyone was offended.” This follows Trump telling the New York Times last week that “Hillary Clinton was married to the single greatest abuser of women in the history of politics.”

Maybe. But that was until Trump himself entered the political ring.

Trump has said no one respects women more than he does, but he has a funny idea of respect. Trump doesn’t just grace us with inappropriate jokes and objectify women from afar; his comments have also included attacks about weight, appearance and race. He’s on record as having said he’d date his daughter if she wasn’t his daughter, and he’s been accused of statutory rape and rape (allegations he has denied).

All of this, of course, comes on the heels of his latest strategic attacks against Hillary Clinton, attacks that involve denigrating her marriage to Bill. He said he’d bring it up during Sunday’s debate to unsettle the Democratic candidate.

Trump has displayed a longterm unwillingness to see women as people. He consistently talks about Clinton as an extension of her husband, blaming her for his policies and ideas, and even going so far as to try to implicate her in his infidelity, as if having an unfaithful husband disqualifies her from running for President.

Meanwhile, in the newly released tape, Trump says about an unknown woman, “I moved on her like a bitch, but I couldn’t get there. And she was married. Then all of a sudden I see her, she’s now got the big phony tits and everything. She’s totally changed her look.”

Womanizing and woman shaming—all in three seconds of commentary, and while he was married himself. (Later, as he hugs Zucker, he says that “Melania said this was okay.”)

Donald Trump has always seen women as objects and will always see them as objects. The ones he deems attractive he hits on, and the ones he sees as obstacles he denounces, especially when blood is coming out of their wherever.

Voters who have always had trouble with Bill Clinton’s affairs, who harken back to the time of impeachment—all while Hillary Clinton stood by his side—please understand what you’re voting for if you vote Donald Trump.

All other voters, remember that no matter what empty statement Trump gives about respecting and loving women, his verifiable, lifelong actions scream otherwise. He’s not anyone’s candidate. 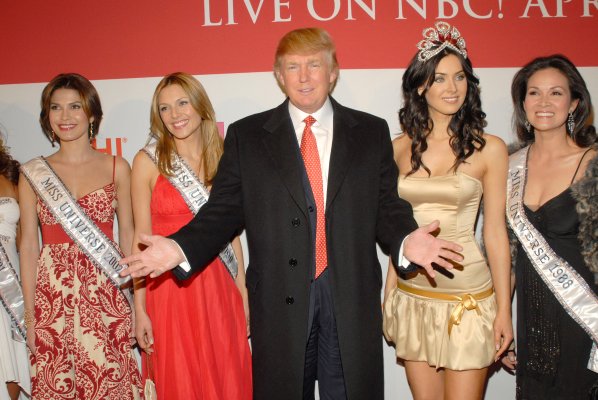 Donald Trump's 'P---y' Comment Is the Root of Sexual Violence
Next Up: Editor's Pick