General Motors has issued more recalls on more of its models than any other auto manufacturer since 2004, according to a TIME analysis of federal safety data. In last ten years, GM has recalled an individual model for a specific issue 756 times. Ford Motor Company has the second highest tally with 559 such recalls. Chrysler has the third most with 411 model-level recalls. 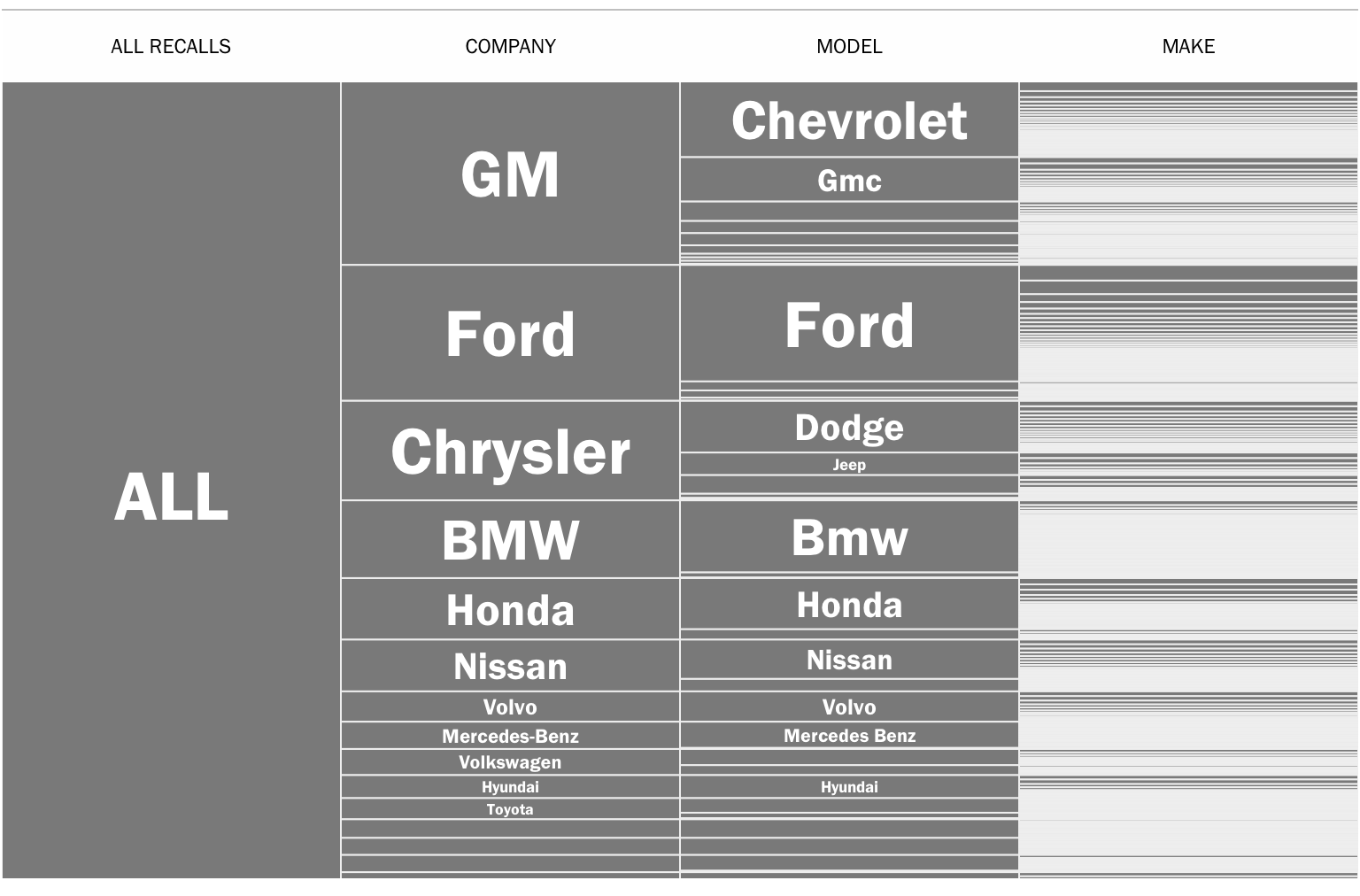 This chart visualizes every major auto company’s recalled models in the United States since 2004. (The measurement is number of recalls issued, not number of vehicles affected.) Each vertical panel shows increasing divisions of the data: First by company, then maker, then model. Some companies use the same name for make and model (like Volvo) while others have multiple brands, like GM’s Chevrolet and Cadillac.

The faulty ignition switch at the center of GM’s most recent recall, a defect tied to 13 deaths that went uncorrected for years, is just one in a long series of parts that the auto manufacturer has had to correct in the past decade. On Tuesday, the company’s CEO Mary Barra will appear before Congress to answer questions about her company’s handling of the latest round of recalls.

Of course, auto companies can recall vehicles for a variety of reasons, from trivial defects to major safety hazards. The National Highway Traffic Safety Administration prefaces much of its data with the warning that “There are a host of reasons why a manufacturer could have more or fewer recalls in a given year or over time – including, but not limited to, the introduction of new technology [and] its barometer for measuring risk.”

In the past several days, General Motors has dramatically stepped up voluntary recalls of its vehicles over a variety of electrical and other issues, bringing its total recalled vehicle count for 2014 to 6 million--a move widely seen as an attempt to bolster its public image regarding safety and responsibility.

While most statistics focus on the number of vehicles recalled, TIME chose total number of recalls by model as a way to compare companies in a way that was less skewed by the size of their fleets.

This data is extracted from the 52,729 records in the NHTSA’s flat data file, retrieved on Mar. 31, 2014 at 8 p.m. Recalls often involve more than one model of car. This chart tallies recalls by model, so any given recall is counted once for each model it affects. However, recalls are only counted once per model even if multiple years of that model are affected. Models and makes are derived directly from government data and may not always perfectly reflect joint manufacturing arrangements between companies.

On a technical level, this means the data was grouped by manufacturer, make, model, and campaign number. The results were reduced to those that came from major auto companies, and exclude companies that primarily make trucks and motorcycles.

Ryan's Balanced Budget Plan Comes at a Steep Cost
Next Up: Editor's Pick