Donald Trump: Undocumented Immigrants Let in 'So They Can Go and Vote'

Republican presidential nominee Donald Trump listens to a question during a campaign stop in Herndon, Va., on Oct. 3, 2016.
Mike Segar—Reuters
By Tessa Berenson

In a meeting with the National Border Patrol Council, Donald Trump seemed to agree with the unfounded assertion that the U.S. government is allowing immigrants into the country so they can vote in the election.

“Some of these individuals that [we’ve] apprehended with criminal records,” he told Trump. “They’re setting them aside because at this point they are saying immigration is so tied up with trying to get the people who are on the waiting list to hurry up and get them their immigration status corrected.”

When Trump asked why, Del Cueto said, “So they can go ahead and vote before the election.”

Trump initially motioned to the reporters in the room and said, “Big statement, fellas.” Then he said, “That’s huge. But they’re letting people pour into the country so they can go and vote. … And these are the professionals. You hear a thing like that, and it’s a disgrace. Well, it will be a lot different if I get elected.”

According to the Chicago Tribune, union spokesman Shawn Moran, who was at the meeting, said Del Cueto and Trump’s conversation “combined” two issues. One is that there has been an increase in attempts to cross illegally cross the border, which Moran told CBS News has to do in part with fears of tightened border security during a Trump presidency. The second is that some union officials believe the United States Citizen and Immigration Service is trying to fast-track citizenship applications for legal immigrants before the election. There is no evidence that USCIS agents have been directed to do so.

The number of undocumented immigrants has decreased during President Obama’s administration, and he has deported more people than any other president, with a particular focus on those with criminal records.

It is illegal under federal law for undocumented immigrants to vote in federal elections. 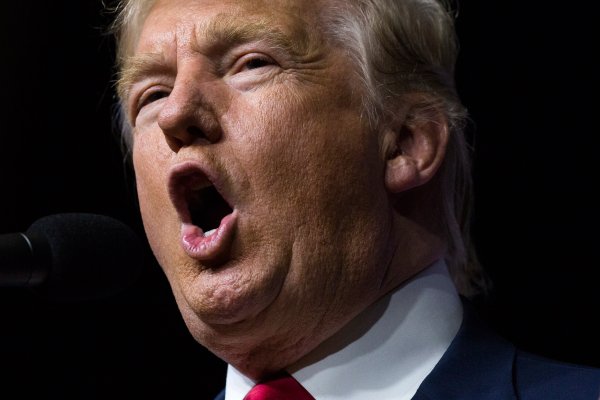 Donald Trump Flubs 'Nevada' Pronunciation While Teaching Reno Crowd How to Say It
Next Up: Editor's Pick