Kelly Clarkson opened up to Jenny McCarthy during an interview on her SiriusXM show on Wednesday about the possibility of having more children with husband Brandon Blackstock.

“I was literally pregnant with Remi, and I was like, ‘You are getting fixed. This will never happen to me again,’” Clarkson, 34, revealed on The Jenny McCarthy Show. “If something happens, it’s a miracle of God. I literally told my OBGYN on the table while open, ‘If I get pregnant again, I will find you!’”

When McCarthy asked Clarkson, “Are you both fixed?” the American Idol alumna gave a resounding, “Yes.”

Clarkson, who is also a step-mother to Blackstock’s eldest children, Seth and Savannah, told McCarthy that her pregnancies were difficult.

“It’s horrible. Nothing is beautiful, nothing is magical,” she said. “Whatever, you’re that person that gets that pregnancy, good for you. I will remind my children every day of their lives what I [went through].”

The “Piece by Piece” singer went on to say she wanted a second child to give her daughter a friend to grow up with.

“I was, like, hospitalized both pregnancies,” she told McCarthy. “I wanted another little buddy [for River]. I didn’t want a kid to just be an odd man out because I felt like that a lot. I wanted her to have somebody her age, like when we’re traveling. And so I thought, ‘OK, we’ll just do it again.’ I was like, ‘There’s no way it can happen again,’ but it was worse. Remi’s pregnancy was worse than River’s.”

The mother of two joked in a recent interview with Ellen DeGeneres about having more kids, while promoting her new book.

“Yeah,” she said on the show, before quickly correcting herself. “No, not kids. I thought you meant books! Ah! My husband full on just had a heart attack. No. We have four because I married into two. So we have a 15-, 9-, 2[-year-old] and 5-month-old … I already have days where I cry, so we don’t need any more kids. It’s a lot.” 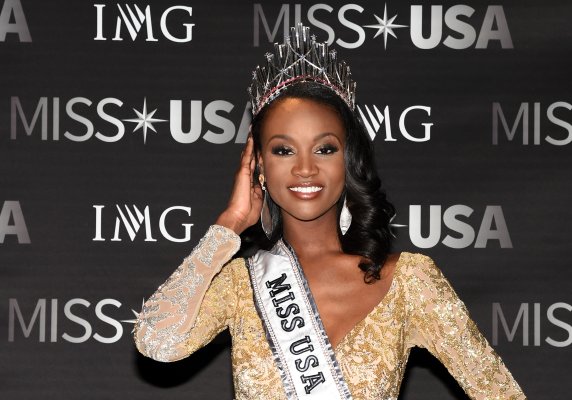 Miss USA Slams Pageant Stereotypes: 'We Come in All Shapes, and Sizes, and Colors'
Next Up: Editor's Pick