The Philippine Foreign Minister Wants to End 'Shackling Dependency' on the U.S.

Secretary of Foreign Affairs of the Philippines Perfecto Yasay Jr. speaks during a forum at the Center for Strategic and International Studies headquarters in Washington, D.C., Sept. 15, 2016.
Zach Gibson—AFP/Getty Images
By Tekendra Parmar

The Philippines wants to liberate itself from a “shackling dependency” on the U.S., according to the country’s Foreign Affairs Secretary, Perfecto Yasay Jr.

He said the move was “imperative in putting an end to our nation’s subservience to United States’ interests,” according to a statement on the website of the Philippine Department of Foreign Affairs.

In an extraordinary outburst — first made on Tuesday on what appears to be his Facebook page — Yasay accused the U.S., a former colonial power in the Philippines, of holding “on to invisible chains that reined us in towards dependency and submission” after the proclamation of Philippine independence in 1946. He also accused it of being unable to “promptly come to our defense under our existing military treaty and agreements,” and said Washington had forced “Filipinos into submission to American demands and interests.”

Referring to tension in the South China Sea, Yasay wrote, “We have serious concerns and challenges with the Chinese as we try to engage them in bilateral talks” but said that “past mistakes” in Manila’s relationship with Washington, which he referred to as “our white big brother,” would be “instructive for this purpose.”

Duterte has repeatedly told Barack Obama to “go to hell” over criticism on the country’s war on drugs and the U.S.’s refusal to sell weapons to the Philippines.

On Tuesday, speaking to a Jewish congregation in Manila, the President said he would “break up with the United States.” According to Reuters, he mentioned that he was “emotional because America has certainly failed us.”

Duterte has also told the U.S. and the European Union to “go ahead” and withdraw aid to the country if they are unhappy with the country’s war on drugs.

When asked about Manila’s increasingly anti-American stance, White House spokesperson John Kirby told Reuters that “[the U.S. is] mindful of the rhetoric but … believe[s] that it is at odds with the kind of cooperation that we have right now.”

Kirby also told Reuters that for the fiscal year that began on Oct. 1, the U.S. committed $180 million to the Philippines and that the U.S. was committed to working on areas of mutual interest. 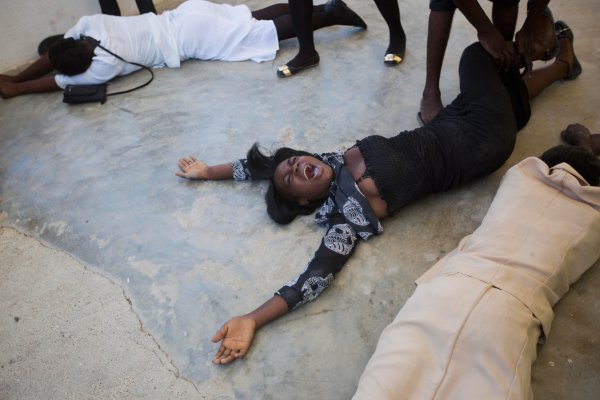 Scenes From the Aftermath of Deadly Hurricane Matthew in Haiti
Next Up: Editor's Pick