We Can't Trade Pollard for Peace

Depending on your point of view, the issue of Jonathan Pollard, convicted American Jewish and Israeli run spy, keeps turning up like a bad penny or a lucky nickel. But in either case, releasing Pollard, in the context of the current peace process travails would be bad policy. Indeed, it reflects the weakness and desperation of an administration that is presiding over a peace process not yet ready for prime time.

The issue at hand isn’t why Benjamin Netanyahu is asking for Pollard’s release. Israelis have been doing that at all levels (Ehud Barak, Shimon Peres) since they abandoned him in 1985 — when he together with his wife (and cat) arrived at the Israeli Embassy seeking refuge in the wake of an 18 month Israeli-orchestrated spying spree that resulted in one of the most serious (still modest by Snowden standards) breaches of classified material and sources and methods in intelligence community annals. The Israelis turned him away. Pollard was arrested, tried, and given a life sentence. Finally, in 1998 the Israeli Government formally admitted to running him. And from Israel’s perspective, like a soldier left on the battlefield, they feel obligated — as awkward as it may be to have run an American Jew against its closest ally — to redeem him.

No, the fascinating aspect of this affair is why the Obama Administration has decided, in the face of their predecessors’ refusal to free Pollard, to consider his release now. The answer may be clear. But it is neither compelling nor wise.

In short, the peace process is in trouble.

Indeed, these many months it has been a noble exercise in diminishing (even vanishing) expectations. It started last July as an effort to reach a comprehensive agreement on the final status issues like Jerusalem and borders. Since then that lofty and unrealizable goal has been replaced by an effort to reach an agreed framework designed to guide negotiations toward a final deal. Not only does even that now seem elusive, but the peace process is also hung up on the issue of prisoner releases — a matter that has turned out to be a confidence destroyer, not enhancer. And it is to solve this knotty problem that the Pollard issue is apparently back on the table. In essence, to fulfill the final and most controversial tranche of Israeli-held Palestinian prisoners releases, the Prime Minister wants to be compensated, particularly given his view that the negotiations have not produced on substance what was expected. Indeed, he’s now under pressure not to ahead with the prisoner releases at all.

And what’s the quid for the quo? What does the administration get for releasing Pollard — something none of its predecessors agreed to do? A final deal on Middle East peace? How about just an agreed framework to guide the negotiations? How about agreement on just one ball-busting-tough issue like borders or Jerusalem? Nope. Best we can tell, the release of Pollard produces a continuation of the negotiations, the release of the fourth tranche of prisoners (maybe even a few hundred more), and perhaps a kind of wink-and-a-nod time-limited settlement freeze, the kind that the Israeli government doesn’t have to acknowledge and to which it might not even adhere. And let’s not forget the possibility that as part of the deal Palestinians won’t wage a “let’s sanction Israel” / “go to the UN” campaign for a while longer. In essence, instead of being traded for something big, valuable, and consequential, Pollard would be let out for peanuts. If this is the price the administration is prepared to pay for a continuation of the talks, what will it cost to do the final deal?

This isn’t the first time the Administration has allowed short-term considerations to drive it to bad policy outcomes. Back in 2010, the White House offered Israel F-35s and other sophisticated military equipment in an effort to get an additional two-month settlement freeze out of the Netanyahu Government, presumably on the assumption that enough progress might be made within that period to produce a breakthrough. That was a fantasy. Mercifully, that deal didn’t go through. And if we’re lucky this one won’t either.

Mixing Pollard apples with peace process oranges is not only foolish, it’s wrong from the standpoint of America’s national security and has implications for the intelligence community. In 1998, in his first incarnation as Prime Minister, Benjamin Netanyahu lobbied Bill Clinton hard for Pollard’s release at the Wye River summit, where the President was trying to broker an agreement between Netanyahu and Arafat. Clinton gave it serious consideration and was inclined to agree. CIA director George Tenet, also at Wye and immersed in the Israeli-Palestinian security part of the talks, threatened to resign if Clinton agreed to spring Pollard. The President was lobbied hard also by Secretary Albright to reject the Pollard release. He backed off, and we got the deal without Pollard.

Most of us don’t know — and may never know — how large Pollard’s security breach actually was. But in 1998, if Tenet threatened to resign to prevent the Pollard release, it must have been pretty bad.

What’s changed today? How do we justify letting Pollard out now if we wouldn’t do it then? Wouldn’t CIA Director John Brennan want to threaten to resign, too, if a decision is made to free Pollard?

These are complicated matters. But one thing is clear. If Barack Obama wants to release Jonathan Pollard because he’s paid his dues, then let him do so on humanitarian grounds. But don’t introduce other matters into an already dysfunctional negotiation, try to justify the release in the name of a peace process that isn’t going anywhere, undermine the intelligence community in the process, and pretend to be pro-Israel by doing something that even the most pro-Israeli president in U.S. history, Bill Clinton, wouldn’t do. Releasing Pollard won’t save the peace process. But not releasing him will spare us all a boneheaded move and yet another tactic in search of a strategy.

Aaron David Miller, currently a VP at the Wilson Center in Washington, served as Middle East negotiator in Republican and Democratic administrations. 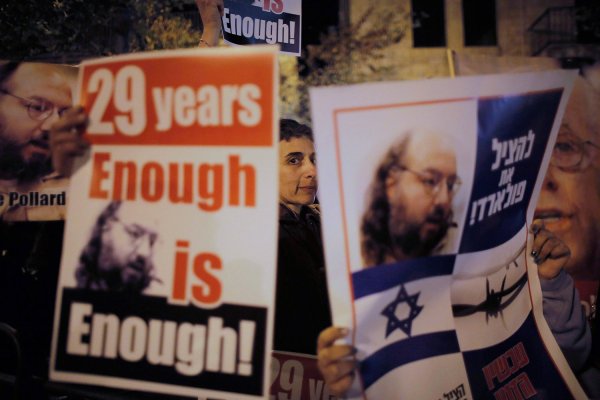 Israelis See Pollard as a Hostage and Hero
Next Up: Editor's Pick