Facebook’s plans for bringing virtual reality to the mainstream involve a lot of money and a new headset.

The social networking giant’s Oculus virtual reality unit is developing a new headset that would not rely on an expensive personal computer to power it, like the company’s Oculus Rift headset. Facebook CEO Mark Zuckerberg, who announced the new headset on Thursday at Oculus’ developer conference in San Jose, Calif., said development is still ongoing that did not say when the device would be publicly available.

There are two categories of VR headsets—those that require a mobile phone to operate, like the Samsung Gear VR headset, and those that need beefy personal computers to power them like the HTC Vive headset. The trade-off is in the quality of the imagery and convenience.

Current VR headsets that are built for smartphones like Google’s Daydream View headset that was announced this week cost under $100. But they are considerably less powerful than devices like the Oculus Rift, which retails for $599 and is capable of more compelling graphics and interactions.

Facebook’s new headset would presumably sell for somewhere in between these two different categories of devices.

In April, Samsung, which partners with Oculus to provide the software for its Gear VR headset, said it was developing a similar headset that does not require using a mobile phone.

Also on Thursday, Zuckerburg said that Facebook planned to invest $250 million in companies and developers to fund the creation of virtual reality content like video games and movies. He said the new investment would double the already $250 million Facebook has spent so far on funding VR content creators. The funding is necessary to create more compelling VR content to accompany the company’s hardware.

Additionally, Facebook said it would invest another $10 million on VR content creators who develop virtual reality media for the education industry.

Facebook isn’t alone in trying to kick-start virtual reality. HTC said May that it had formed a $100 million investment fund for VR-centric startups, particularly those focused on VR content.

In addition to a new headset, Facebook said it would sell new controllers (the company’s first foray into proprietary controllers) for its existing Rift headset that will sell for $199 and ship on Dec. 6. Oculus also plans to ship new $49 earphones starting Dec. 9. 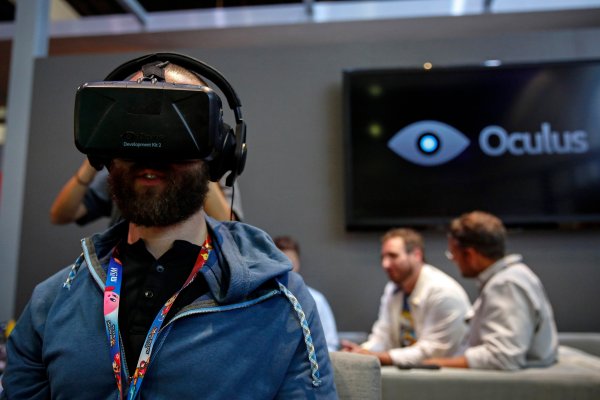 Facebook is Trying to Solve Virtual Reality's Biggest Problem
Next Up: Editor's Pick