Weather forecasters expect Hurricane Matthew to drop nearly a foot of of water in some places with winds hitting 140 mph. Those are frightening numbers to be sure, but many weather experts say the wind and rain do not represent the greatest threat to life and property in the coastal region from Florida to South Carolina.

Instead, meteorologists say a phenomenon known as storm surge may be responsible for the most damage in the wake of Hurricane Matthew. Storm surge occurs during hurricanes when storm-related weather temporarily elevates seawater levels and winds push that water onto land. This phenomenon can drive sea levels higher by several feet or more, causing devastating coastal flooding.

Read More: U.S. Flood Risk Could Be Worse Than We Thought

Some places along the Florida coast can expect as much as nine feet of storm surge, particularly during high tide, according to weather forecasters. High tide is expected just after midnight Friday morning and again early Friday afternoon when the storm is along the northern part of the Florida coast. And, unlike the heaviest rainfall, storm surge will begin to occur before locals expect it. “You’re going to get storm surge before the storm gets there,” says Sean Sublette, a meteorologist at Climate Central.

Storm surge has worsened the damage in a a number of especially devastating storms in the past, including Hurricane Katrina and Hurricane Sandy where storm surge reached heights of 25 and nine feet, respectively, according to a National Hurricane Center report.

The precise effects of climate change on hurricanes remains a topic of debate but scientists say rising sea levels due to global warming has increased the threat of storm surge in recent years. Sea levels have risen 1.2 inches per decade since 1992 and could rise by more than 4 feet by the end of the century, if not more. That may not sound significant on the surface, but it makes a significant difference when combined with the storm surge caused by a major hurricane.

“There is not uncertainty about sea level rise,” RAND researcher Jordan Fischbach told TIME last year. “As we get more sea level rise, these large storm events will with certainty damage to assets and people.” 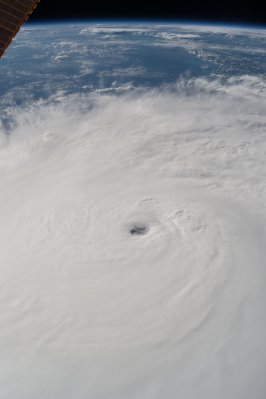 This is What Hurricane Matthew Looks Like From Space
Next Up: Editor's Pick