After 25 years of unquestionably being The World’s Most Hated Band, Insane Clown Posse has just about seen it all. We’ve had an album censored and then yanked from stores by Disney, been completely slaughtered by music critics despite selling over 12 million albums and, for the first time in music history, had our entire fanbase—The Juggalos—officially labeled a “hybrid gang” by the FBI, which to this day continues to have thousands of horror rap–loving fans added to a punishing gang database simply for sporting our logos in public, whether it’s a tattoo, T-shirt or even something as simple as a car window sticker.

So when TIME asked us for our opinion on this wave of so-called “killer clown ” sightings that seem to be popping up all over America, we were intrigued. Rolling Stone called the rash of reports a “hoax” in a recent article that also pointed out that way back in 1981, when me and my partner in rhyme and best friend Shaggy 2 Dope were in grade school, there were reports of so-called “phantom clowns” supposedly driving around in vans, harassing kids, and in some reports, wielding weapons like machetes. Despite the many reports, police could not confirm one incident of this wave of sightings and not a single “phantom clown” was ever arrested.

Cut to 2016. Everyone once again is seeing so-called “killer clowns” everywhere—popping out of bushes, threatening people on social media and assorted other public pranks. Cops have actually arrested a few people this time around, though, because there’s a lot of copycats out there and mass hysteria has a way of making people do stupid s—.

But as ICP has discovered over the last decade, there’s a whole army of scary, terrifying and dangerous clowns out there in this country trying to suppress the rights of thousands of people to exercise the most basic part of the Declaration of Independence, which evokes the freedom to “Life, liberty and the pursuit of happiness.” The only difference is these clowns don’t wear greasepaint.

These clowns threaten the very fabric on which our nation was supposedly founded upon—and for some f—ing crazy-a– reason, they’re getting away with it. From keystone-cop clowns shooting unarmed citizens, to racist clowns burning down Islamic centers or clowns in the NSA spying on us through our cell phones and laptops, America has turned into something far more terrifying than Insane Clown Posse’s Dark Carnival. Even a scrub like me who dropped out of school in ninth grade can see what’s going on. Today’s reality is scarier than anything you’ll ever hear on one of our albums.

If you want to see the ultimate example of these “killer clowns” in action, consider what happened to our hard-working, mostly blue-collar fans, the Juggalos. In 2011, the FBI named the Juggalos in its National Gang Threat Assesment. Ever since, they have been targeted, profiled and blatantly discriminated on by law enforcement agencies across America. Over the last four years, we’ve been working with our legal team and the ACLU of Michigan, to prove to the U.S. Department of Justice that this completely ridiculous gang label slapped on Juggalos is literally destroying lives.

Fact: People simply walking their dogs while wearing an ICP shirt have been stopped, searched and added to the local gang member database—when no crime has been committed. This has happened hundreds and hundreds of times across the U.S., and the stories just get worse from there. Recently, there was a probation officer who was let go for being identified as a Juggalo, and her employer had no problem writing it as the reason for her severance in her termination paperwork. Others have lost their jobs, custody of their kids and been subject to illegal search and seizure.

Which is why on September 16, 2017, at the National Mall in D.C., the Juggalo family and our allies in other civil action groups will march on our nation’s capital, as well as host a two-day free concert, to send our message directly to the U.S. Department of Justice: The discrimination against Juggalos must be seen for the unconstitutional travesty it is.

So you don’t like ICP’s profanity-filled raps, or that we throw soda everywhere at our shows. Or you don’t get why anybody would ever want to attend our Gathering of the Juggalos festival. Just know that, despite these sensationalized reports about “killer clowns” wreaking mischief across the nation, there are real clowns out there killing ours and your very rights as an American citizen.

Now that’s truly scary, and nothing to clown around about. 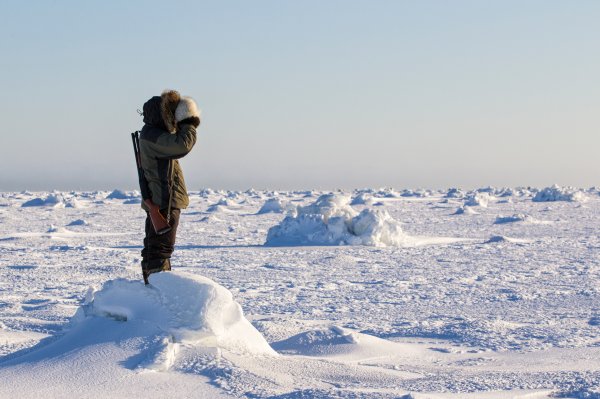 What You Learn About Living From a Week in the Arctic
Next Up: Editor's Pick