Samsung's Galaxy Note 7 Problems May Be Far From Over

Samsung’s smoking phone issue may have just gotten worse. The company announced two weeks ago that about half of all recalled Galaxy Note 7 phones in the U.S. had been replaced—but the recall may not have solved the problem, as Reuters reports that a replacement model began smoking inside an airplane on Wednesday.

Southwest Airlines evacuated 75 people from an airplane that was set to fly from Louisville International Airport to Baltimore after a Samsung device overheated and began to smoke, according to the Associated Press. The family that owns the phone said it was a replacement Note 7 model, Reuters reports.

Samsung was unable to confirm whether the phone was a replacement model or one affected by the recall. The company issued the following statement to TIME:

Just days earlier, The Wall Street Journal reported that customers in the U.S. and South Korea who had received replacement Note 7 devices complained that the phone was too hot to hold near the ear during a phone call. Some users in China also reportedly claimed their Galaxy Note 7 devices caught fire, although Samsung says it uses safe batteries in that region, according to Reuters.

This comes after the U.S. Consumer Product Safety Commission issued a voluntary recall of Note 7 phones sold before Sept. 15. Samsung stopped selling the device in early September after some owners had reported that the phones were overheating and in some cases causing injury or damage.

Dr. Donald R. Sadoway,the John F. Elliott Professor of Materials Chemistry at the Massachusetts Institute of Technology, offered a theory about why the batteries in Samsung’s new phones may be experiencing these issues.

“It’s either a statistical fluke in the manufacturing process where there are some local hotspots or there are perhaps some metal shavings, some kind of a shorting,” he said in a previous interview with TIME. “But it seems as though, from what I’ve been able to read, the fires occurred when the owners are charging the phone. That means that while they’re forcing current through it, somehow there is a side reaction that is very different from just recharging the battery.”

Samsung reportedly pushed its suppliers to deliver the Galaxy Note 7 more quickly in an effort to compete with the iPhone, which debuted after the Note 7 in early September, according to Bloomberg. 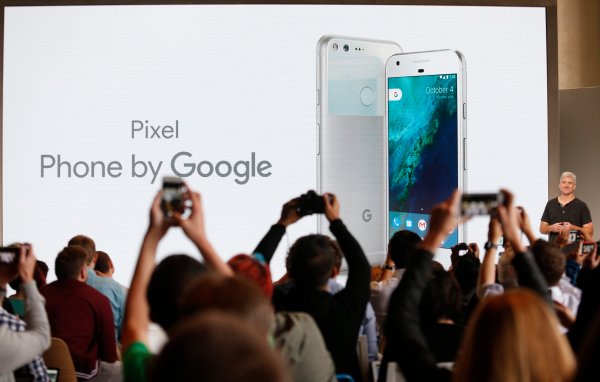 Google's New Phones Are Exactly What Android Needs Now
Next Up: Editor's Pick