No matter how many fans you have, you’re always going to have haters — and Katie Couric struggles with online trolls just like any other celebrity.

The Yahoo Global News Anchor recently appeared on Anna Faris‘ podcast, Anna Faris is Unqualified. In part one of the interview which aired Tuesday, Couric, 59, opened up about her experiences coping with cyberbullying.

“Honestly, I never get used to it,” she admitted. “[The other day] I was going through my Facebook mentions — and I don’t go on Facebook that much, I really use Twitter and Instagram a little bit more — but I was looking at Facebook because I had posted this profile of this darling girl named Abby Shapiro who died of osteosarcoma when she was just 16 years old. … I introduced her to Karlie Kloss, and Karlie was just amazing. She went to see her at Georgetown Hospital in Washington, she would call her from the VMAs — I mean, she really took an interest in this young woman and made me really appreciate the person Karlie Kloss.”

“But anyway, I posted this tribute to her because I was doing that in the days leading up to our [Stand Up to Cancer] event and I read this comment and some guy said: ‘Katie, I watched your interview with Tom Hanks. Clearly you’re over-tanning — your skin looks like a monkey scrotum.’ “

Recalled Couric: “I thought, Wow, really? First of all, I thought, Oh gosh, maybe I am over-tanning, but then I thought, What motivates someone to be so nasty?”

“I think when you become a public figure, per se, people completely lose sight that you’re a real person,” continued the journalist. “It’s this weird kind of objectification, or depersonalization, and when I read these mean comments it’s like a knife in my heart.”

Faris, 39, also took a moment to address her own experiences with online haters.

“I mean, I’ve had people totally tear apart my looks time and time again,” she said. “You can get a ton of compliments that are so wonderful and feel so good, but then there’s that one thing that somebody says that does rip you apart a little bit and you are jarred. And you rationalize it within yourself … but it’s mystifying, the idea of somebody being cruel for the sake of attention, I guess?”

Couric said what’s most interesting to her is to figure out the motivation behind the critics.

“I usually rationalize it, or sort of come to terms with it, by saying it’s usually the product of people who are really unhappy — unhappy with their own lives, unhappy with what they’ve done or where they are,” she said. “And it’s very easy, I think, when you’re in a bad place to lash out at people who seem to be happy or seem to have things that you don’t have. I think that’s a very weird primal instinct. I don’t know if you all have ever felt jealous or resentful of people, but it’s almost like this thing that kind of bubbles up in you and you can’t necessarily keep it at bay.”

Couric even recalled a specific moment from her days co-hosting the Today show, before the internet was used in the way it is today.

“Some man wrote this very insulting note … he said, ‘I thought your dress was so unattractive and your hair looks like a ski slope for an adventurous sparrow,’ ” said Couric. “Funny how I remember this — I mean, this was probably in the early ’90s! Well, that was a letter, and most of them ended up in the circular file, but with the Internet you can’t avoid these comments. Because if you’re looking for any sort of feedback you can’t help [but come across it].”

“It’s really hard for me to handle and I’ve been doing this a long time,” she admitted. “Everybody gets it but it does remind you of this negative side of human nature that is very disconcerting and disappointing.”

Couric also copped to the “embarrassment” of the insulting tweets or mentions she receives.

“I think part of the embarrassment is the collective shaming you feel when other people are reading these awful comments — it feels like a schoolyard taunt that everybody is listening to and they’re all looking at you and embarrassing you and shaming you,” she said.

And while she listed several positive things the internet has brought (“access to information, it builds communities, it helps fuel social movements,”) Couric also recognized the negative. 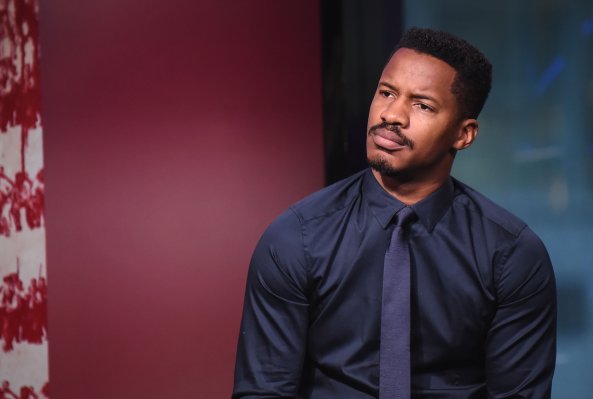 Nate Parker Criticizes Coverage of His Rape Trial: 'I Think It’s Been a Tragedy On So Many Levels'
Next Up: Editor's Pick