How Mindfulness Can Save You Money

HarperCollins
Ideas
By Claudia Hammond
Claudia Hammond is the author of Mind over Money: The Psychology of Money and How to Use It Better

If you put someone in a brain scanner and give them something delicious—say, wine or chocolate—the reward centers of their brain light up. In other words, it making them feel good. But if you promise them a delicious item in the future, there’s no reward-center activity. If it’s not in our hands (or mouths), we don’t care.

Money is the rare exception to this rule, and recent studies show it has a unique ability to affect the way we think, feel and behave—even if we don’t physically have any, and even if we’re unaware its influence.

When people pay in cash instead of by card, they tend to spend less money, because they can see and feel the exchange. Additionally, we’re less likely to pull from our savings if it’s stored in a bank with a name that makes it sound geographically far away, according to a study from social psychologist Sam Maglio. And purchasing while grumpy often primes us to get a better deal.

Being aware of how we respond to money can also help us spot the clever tactics used by stores to entice us into buying more expensive goods. Imagine you’re buying a new laptop. Whether in store or online, you often see them displayed in threes—a cheap model, one costing a little more and then a sleek, fancy one with a high price to match. With the expensive one present, twice as many people go for the mid-priced one as they do when that expensive isn’t there, swaying your opinions. It’s known as the compromise effect. So next time you see something laid out in threes, beware the mid-priced item.

The most important mind hack, though, may be to spend money in ways that are proven to make us happier. Psychologist Elizabeth Dunn from the University of British Columbia has shown that the act of buying experiences makes us happier than that of buying material goods. We anticipate experiences more, and afterward, we’re left with the warm glow of our memories, whereas a new TV isn’t new for long. If you can pay in advance and divorce the pain of paying from the pleasure of the experience, it’s even better. 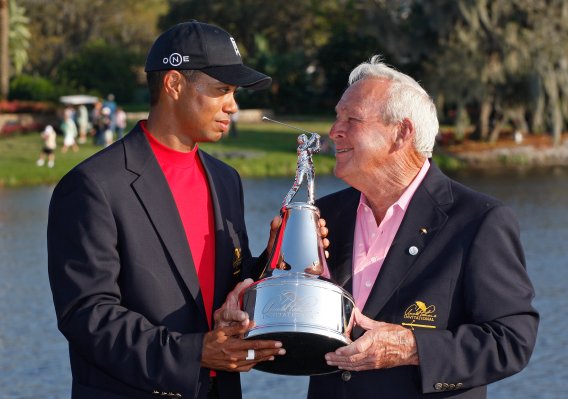 When Arnold Palmer Met Tiger Woods
Next Up: Editor's Pick