The Digital Cloud Is Underwater-and Vulnerable

A haul rope is returned to the Silver Arrow after a fiber optic cable was brought to shore in Haines for the Alaska Power and Telephone Company on Friday. The cable will bring more bandwidth to the upper Lynn Canal communities of Haines and Skagway, September 2016.
Michael Penn—Juneau Empire/AP
By Karl Vick and Emily Barone

It was a symbol of progress, the first transatlantic telegraph cable paid out from the deck of a ship between Telegraph Field in Ireland and Heart’s Content, Newfoundland. It took four years to lay, and it functioned for three weeks in 1858 before breaking. Today there are 312 undersea cables, all wrapped around glass fiber as thin as a human hair. They carry 99% of the world’s intercontinental data, including business transactions worth $10 trillion a day. And one is being repaired about every third day.

It’s usually a fish trawler or anchor at fault, though in 2015 the Pentagon closely watched Russian submarines stalking cable routes, and also a spy ship equipped with submersibles capable of reaching the cables. Close to shore, the lines are reinforced to the thickness of a soda can and buried in trenches made by an undersea digger. But deep at sea they lie right out on the seafloor, about as thick as a garden hose and usually near cables laid earlier, to save the cost of surveying a new route.

During the Cold War, the U.S. placed a tap on a Soviet military line, sending divers down each month to retrieve the tapes. Today they’d use prisms, to divert the light that carries the messages in fiber-optic cables. But as Edward Snowden showed, the U.S. doesn’t really need to bother: the National Security Agency has ready access to pretty much all data that passes through the U.S.

That could change soon. With global warming melting Arctic sea ice, the Northwest Passage is open to ships laying a cable from Asia to Europe. This will speed transmission for financial traders who care about milliseconds–and potentially allow a path for future lines to avoid routine U.S. surveillance.

The most vulnerable point, however, may be landfall. A 2012 Harvard study warned that the terminals where cables come together onshore were vulnerable to hackers or foreign penetration and should get the same level of security as nuclear installations. 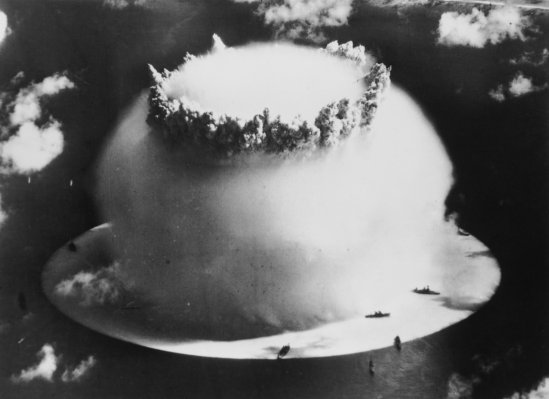 Marshall Islands 'Unable to Sue' over Nuclear Proliferation
Next Up: Editor's Pick