Daveed Diggs has become accustomed to rapping rapidly in front of hundreds of people in the Broadway smash Hamilton. But at 7:30 a.m. on a Tuesday in September, he’s performing for an audience of one.

Sitting in a coffee shop in the New York City neighborhood of Washington Heights, just north of Harlem, he warns that it’s “too early to do anything,” including rap. He has to catch a flight to Los Angeles soon—a trip he makes with increasing frequency now that he’s an in-demand actor, including a six-episode arc on black-ish that began on Sept. 28. Still, Diggs eventually begins singing at his signature clip:

“Feeling the weight of a city growing fat off hipster chic/Fusion food, organic beets./ It’s a wonder that we still tongue-in-cheek/ When it’s so much hand-to-mouth in the streets.”

He wrote the 2012 song about his hometown of Oakland, Calif., but its sentiments could easily apply to the skyrocketing rents in upper Manhattan, where he now lives.

“I’ve been sort of gentrification-obsessed. Right before I left Oakland in 2012, I was feeling it. Now I go back sporadically, and the change is drastic,” he says. “It’s also strange that everywhere I go from now on, I’m a gentrifier.”

Diggs spent the years after he graduated from Brown University in 2004 auditioning for roles in New York. He couch surfed or slept on the subway when he couldn’t find a place to crash, and eventually moved back to the Bay Area. He found what he describes as Hollywood’s tokenism demoralizing: “Sometimes it feels like the project is just trying to get a black person in a role for the sake of it.”

In that respect, Hamilton was revolutionary: the cast of the musical about America’s Founding Fathers and Mothers is almost entirely nonwhite. “Everybody was like, ‘James Madison is black? You’re going to confuse people,'” Diggs says. “But Hamilton is an immigrant story, and the cast is what that would look like in a modern context. Turns out, it helps the audience understand the story better.”

Diggs won a Tony in June and left the production in July to try acting onscreen. In his first meeting with his agent, he mentioned black-ish, which, like Hamilton, trains a pop-culture lens on racial issues. Creator Kenya Barris cast him the very next week.

Diggs plays Johan, the brother of the show’s matriarch Rainbow (Tracee Ellis Ross, who, like Diggs, is biracial). “I’ve always related to [Rainbow] the most because there’s something particularly hippie-Bay Area about her upbringing,” he says. Diggs describes Johan as “post-race” and says he comes into conflict with Rainbow’s husband Dre (Anthony Anderson) over black identity.

Diggs admires the way both Hamilton and black-ish strike a balance between the popular and political. In Hamilton, Diggs earned one of the biggest cheers when his Marquis de Lafayette and Lin-Manuel Miranda’s Alexander Hamilton croon, “Immigrants: we get the job done.” And he praises last season’s episode of black-ish that dealt with police brutality.

Diggs has become increasingly political in his music too. His latest album with experimental hip-hop group clipping., Splendor & Misery, chronicles a slave rebellion in outer space. “In the wake of Black Lives Matter, everyone is putting out their most racially and politically charged album,” he says. “Look at [Beyoncé’s] Lemonade or Kendrick [Lamar]’s work. For hip-hop right now, saying nothing isn’t an option anymore.” 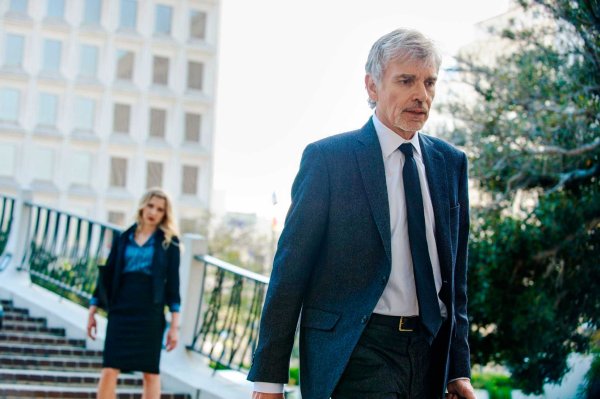 A TV Legend's Unremarkable Return
Next Up: Editor's Pick