Who Will Win the 2016 Nobel Peace Prize? Here Are Some Contenders

The 2016 Nobel Peace Prize will be awarded on Friday Oct. 7, with a record 376 nominees in contention for the honor.

While we know that 228 of the nominations are for individuals and the remaining 148 are organizations, the names themselves must be kept secret until at least 50 years after the Prize has been awarded. The level of secrecy fuels speculation over the nominees every year, with this year’s rumored candidates ranging from the negotiators of the Colombia peace deal to activists helping with the European migration crisis.

Selected by the Norwegian Nobel Committee, the winner (or winners) receive a Peace Prize medal, diploma, the title of Nobel Laureate and a financial award worth $930,000. Previous Laureates have included Martin Luther King Jr., Malala Yousafzai and Mother Teresa. However, the Committee is well-known for ignoring the news cycle and awarding the Prize to sometimes unexpected recipients for work they have already done or projects they are about to undertake — such as President Barack Obama, who won in 2009 during his first year in office.

Since betting began on the Prize in 2009, the bookmakers’ favorite has never won, showing that it “can often go to a shock contender,” says Alex Donohue, from British betting agent Ladbrokes. Even so, here is TIME’s guide to the some of the names to watch this year.

The Greek Islanders
A group of residents from Greek islands have been nominated to represent all Greek citizens who have helped refugees, and are bookmakers’ leading choice to receive the prize. In 2015, the island of Lesbos received approximately 800,000 refugees fleeing conflict in the Middle East and elsewhere. Despite the nation’s own economic troubles, the nominated islanders have been praised for their compassion in aiding the new arrivals. One of the representatives nominated is 86-year-old grandmother Elena Kamvisi, who was pictured earlier this year feeding a Syrian baby. “In this old age I will die with a clear conscience,” she said to Reuters.

Read More: See How Lesbos Became a Limbo for Thousands of Migrants

Angela Merkel
A hallmark of the German Chancellor’s leadership has been her “open-door” policy on refugees, a move that has come under fire and seen her approval ratings drop in her home country. Yet as TIME’s Person of the Year and a contender for the Prize in 2015, Merkel has won the support and praise of the international community, with President Obama calling for other members of the European Union to follow her leadership. British bookmaker William Hill recently cut the price of the Chancellor’s odds, as half of all bets on the market have been placed on Merkel to win.

Denis Mukwege
Mukwege is a Congolese gynaecologist and perennial favorite to win the Prize. Appearing in the TIME 100 last year, Mukwege specializes in aiding the recovery of survivors of sexual violence at the Panzi Hospital in Bukavu, which he founded in 1999. Mukwege and his staff have treated over 30,000 patients, and the doctor is also on the advisory committee for the International Campaign to Stop Rape and Gender Violence in Conflict. Upon winning the Seoul Peace Prize in September, Mukwege said “Injustice anywhere on our planet should ring an alarm and I call upon our common humanity to stand together against it. ”

Pope Francis
The Pope would be the first ever leader of the Roman Catholic Church to win the prize and is a strong contender on bookmakers’ lists. Francis’s commitment to compassion and peace is truly global, evidenced by the hands he played in negotiating the peace deal in Colombia and normalizing relations between the U.S. and Cuba, and taking leadership on combating drug wars in Mexico. TIME’s Person of the Year in 2013, the pontiff has also called for world action on the refugee crisis and in his visit to Greece in April this year, 12 Muslim refugees were brought back with him to be housed in Italy.

Read More: The Choice: Why Pope Francis is TIME’s Person of the Year 2013

The White Helmets
The Syrian Civil Defense, nicknamed after the White Helmets they wear, have provided a lifeline to civilians across Syria and particularly in Aleppo over the past months. Comprised entirely of volunteers and ordinary Syrians whose lives have been disrupted by the war, these first responder units have saved over 60,000 lives over the course of the conflict since 2011. Viral videos of the White Helmets pulling people from rubble and a new Netflix documentary have brought the group to international attention, as they have now become the target of the regime themselves. The group appears on the front cover of this week’s TIME.

Juan Manuel Santos & Rodrigo Londoño
Colombian President Juan Manuel Santos and FARC guerrilla leader Rodrigo Londoño were once amongst the favorites to win the Prize, yet recent events have cast some doubt on their chances. Responsible for brokering the peace deal that promised to bring an end to the 52 year war in the country, the dreams of the two negotiators, along with many Colombians, were shattered when the country voted to reject the deal in a shock referendum result earlier this month. Although still appearing on bookmakers’ lists, the Colombian leaders have been dropped from a list of favorites by the respected Peace Research Institute in Oslo.

Svetlana Gannushkina
Activist and human rights leader Gannushkina is the top pick for some speculators. Her organisation, the Civic Assistance Committee, has aided over 50,000 migrants, refugees and internally displaced persons since 1990. A lifelong advocate of refugees and human rights, Gannushkina was recently awarded the Right Livelihood Award, or the ‘Alternative Nobel Prize’, for her commitment and service. The BBC reports that awarding the prize to Gannushkina would draw attention to the Russian regime’s human rights abuses, and might provoke backlash from Moscow. 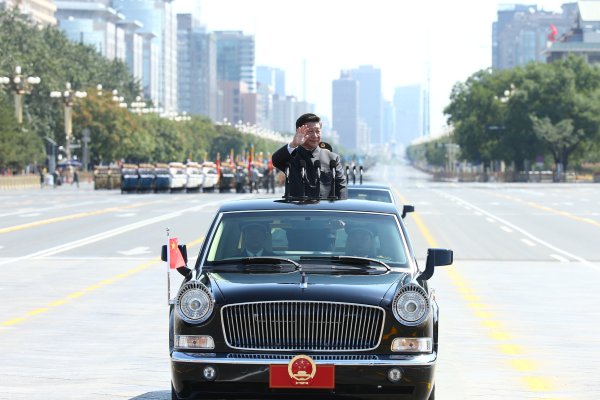 5 Ways China Is More Repressive Under President Xi Jinping
Next Up: Editor's Pick