This Mom's Rainbow Maternity Photo Shoot Has a Powerful Meaning

After suffering six miscarriages, Jessica Mahoney wanted to capture her second successful pregnancy with a maternity shoot that would not only pay tribute to her child-to-be, but also to those she had lost.

“With this pregnancy, things are going really, really well, and everything is clear to have a normal, healthy, full-term baby, and so Kevin wanted to make sure that she got everything that she wanted this time around,” Marrero tells PEOPLE. “They are assuming with all of their infertility struggles that there may not be another baby after this, so she definitely wanted to make sure that she had something [to remember the pregnancy].”

Jessica knew she wanted to do a rainbow-themed portrait in honor of her rainbow baby— a child born after a miscarriage, stillbirth, neonatal death or infant loss. The term comes from the idea that after a storm there is new hope.

“I wanted to make it really, really special, so I thought of doing smoke bombs,” says Marrero, who is based in Rocky Hill, Connecticut.

Marrero worked with her photography mentor Mary Maloney to bring the vision to life, and the beautiful portrait has now been shared and commented on hundreds of times.

“So many women can relate to miscarriages, stillbirths and infant deaths,” says Marrero, who says the photograph was flooded with comments of “overwhelming support. Jess and her husband were reading through the comments, and they were so floored by the fact that people were reading their story, and posting comments with their own rainbow baby stories.” 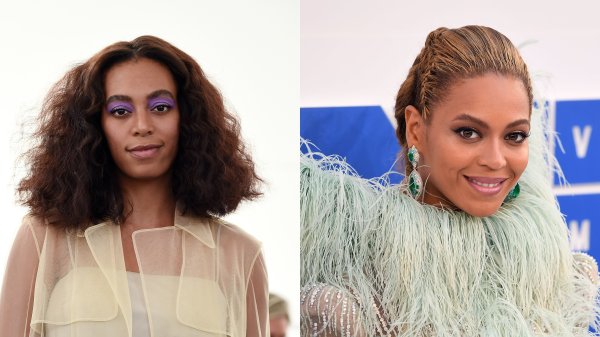 Solange Knowles on Being Compared to Beyoncé: 'It Shouldn't Be Surprising'
Next Up: Editor's Pick