Pastors from the Las Vegas area pray with Republican presidential candidate Donald Trump during a visit to the International Church of Las Vegas and International Christian Academy in Las Vegas on Oct. 5, 2016.
Evan Vucci—AP
Ideas
By Justin Talbot-Zorn and Leigh Marz
Justin Talbot-Zorn is a Truman National Security Fellow and public policy consultant
Leigh Marz is an organizational consultant and founder of Marz Consulting

Commentators in the New York Times, Washington Post, Wall Street Journal, and other outlets have come to the same conclusion: 2016 is the “authenticity election.”

Donald Trump, after all, went from novelty candidate to nominee because of his perceived “authenticity.” Last year, 76% of Republican voters favorably reported that the candidate “says what he believes,” rather than “what people want to hear.” While Hillary Clinton is ahead in the polls and enjoys a wide range of relative strengths, she’s nonetheless been burdened in both the primaries and the general with accusations of inauthenticity, owing to her policy shifts over decades in the public eye.

But is this really a fair assessment of who’s an authentic leader?

For all the talk of authenticity in this election season, there’s been surprisingly little reflection on the actual meaning of the word.

As leadership guru Bill George has noted, authenticity runs much deeper than the Webster’s definition (“real or genuine”). It’s also far more nuanced than saying exactly what pops up in a person’s mind.

For hundreds of years, philosophers have been mulling over the question of what makes a person real—beneath the “masks” that society requires us to wear. Thinkers from the 19th Century’s Søren Kierkegaard to the 20th Century’s Martin Heidegger have extolled the importance of authenticity in the sense of “being one’s self.” Often, philosophers have connected authenticity to autonomy—leading one’s life according to one’s own reasons and motives in a manner that expresses one’s own unique self-identity. By these accounts, Trump does have some claim to authenticity: he’s certainly got his own style.

But, perhaps unsurprisingly, 20th-century philosophers pushed back on these “self-centered” descriptions of authenticity. Michel Foucault called the hunt for a person’s hidden, authentic core the “Californian cult of self.” As American historian and social critic Christopher Lasch pointed out in the 70s, our common conception of authenticity has a lot in common with narcissism.

Over recent years, criticism of the concept of authenticity has only grown sharper. Stanford’s Jeff Pfeffer has written that “the last thing a leader needs to be at crucial moments is authentic.” This summer, Wharton’s Adam Grant wrote in the New York Times that “’Be yourself’ is actually terrible advice… Nobody wants to see your true self.” And, in a 2015 Harvard Business Review cover story, Herminia Ibarra of INSEAD Business School describes authenticity as a paradox: “When we view authenticity as an unwavering sense of self, we struggle to take on new challenges and bigger roles.” She explains that “leadership identity can and should change each time you move on to bigger and better things.”

Not necessarily. Looking in the context of history, philosophy and leadership studies, it’s clear that a person can evolve and self-regulate and still be “real.”

Authenticity shouldn’t be about rigidity or self-centeredness. “Being one’s self” can be about continual self-examination, an iterative process of getting to know the many factors and forces that live beneath a person’s surface and integrating them into the public and professional persona. While we commonly think of authenticity as an inherent trait (“you have it or you don’t”), George and other authorities have come to see it as a quality that a person can work to develop over time.

While there is, of course, no straightforward recipe for being authentic, leaders can practice the fundamentals of authentic leadership by making time for self-examination, taking note of lessons learned through challenges, and carefully considering and integrating feedback from others. Crucially, being transparent and even vulnerable about one’s development can model authenticity for others. All this can help cultivate a kind of authenticity grounded in connection rather than self-centeredness.

As the New York Times reiterated over the weekend, “authenticity is Mr. Trump’s brand.” But fewer and fewer voters are buying it. With revelations of the leaked tapes from 2005, in which he bragged about sexually assaulting women, it’s now clear that he’s hiding his real voice—and making manic attempts to distract the public from hearing it. As his hyper-aggressive performance in Sunday’s debate demonstrates, it’s hard to imagine Trump engaging in any kind of serious self-examination or internalization of outside feedback.

While Hillary Clinton will continue to face allegations of political doublespeak (especially with the latest Wikileaks), there’s at least evidence that she’s doing the work of examining herself and integrating feedback and lessons learned. She’s been willing to apologize and show vulnerability, and she’s notably sought to improve her focus and listening through her widely-reported meditation practice. As NPR reported last year, she actually used contemplative practices to stay present and connected to questioners during the marathon Benghazi hearing on Capitol Hill.

George Burns supposedly said: “Authenticity is everything in politics. Once you learn to fake it, you’re golden.” The joke may not be so far from truth. While no one can fake authenticity, it’s nonetheless possible to work at the practice of authentic leadership. The 2016 race reveals that our politicians have some serious work to do. 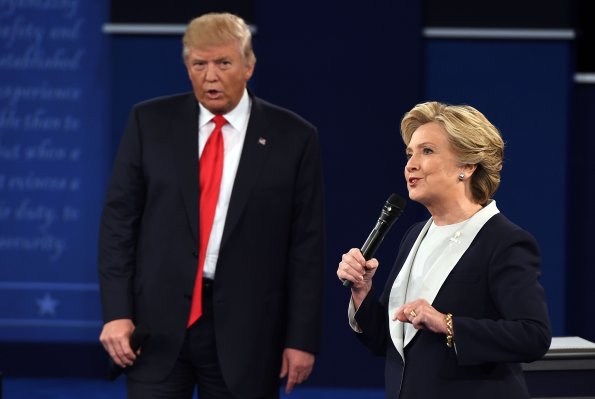