Eight days after the Republican presidential nominee fell into trap after trap set by his Democratic rival, Indiana Governor Mike Pence put on a clinic for his running mate on how to avoid the bait placed by Hillary Clinton and her campaign.

With the bottom of the ticket overshadowed by the top like never before, the showdown between Pence and Virginia Senator Tim Kaine is unlikely to move the needle very much at all in this race — especially with the next presidential showdown coming Sunday. But the battle of the Veeps provided a window into how both campaigns view the race and what they have to do with five weeks until Election Day.

With Democrats believing that Trump’s history of harsh rhetoric is key to swinging undecided voters in their direction, Kaine fulfilled the typical role of vice-presidential attack dog, sacrificing his Midwestern affability to almost single-mindedly attack Trump.

Pence used the opportunity to present a radically different face on the GOP ticket, his steady speaking style projecting calm and thoughtfulness. Forced into the awkward position of defending a man he had criticized in the past, Pence studiously avoided making any defense of his bombastic running mate and rewriting the policies at the top of the ticket, making sure instead to return fire on his rival’s policies.

Under a fusillade of attacks from Kaine about Trump’s record, Pence bravely kept his head down and soldiered forward on a familiar path. A walking superego of the modern Republican Party, the white-haired Pence unreeled lines from the GOP’s urtexts: taxes and government spending must be reduced, immigration controlled, Obamacare repealed and a more muscular foreign policy enforced.

Kaine struggled to pin Pence down to Trump’s controversial positions, as the Indiana governor bobbed and weaved.

“Six times tonight I have said to Governor Pence, I can’t imagine how you can defend your running mate’s position on one issue after the next,” Kaine said. “And in all six cases, he’s refused to defend his running mate.”

“I’m very, very happy to defend Donald Trump,” Pence responded, before declining over and again to do just that.

Still, Pence at times strained credibility in denying his and his running mate’s statements on everything from Barack Obama’s birthplace to whether Pence had called Vladimir Putin a stronger leader than the U.S. President. The denials followed the Trump campaign’s clearly pronounced strategy of whitewashing in the face of scrutiny, betting that their supporters and swing voters won’t bother to read beyond the headlines.

And by the end of the debate, Pence had left nearly every attack against his boss undefended. He ignored the attacks or flatly denied them — no matter the obvious veracity. Pence said Trump did not make complimentary comments about Putin (Trump did) and that Trump had not insulted Mexicans (he did). It took nearly an hour before Pence was finally driven into a corner.

“You whipped out that Mexican thing again?” Pence asked awkwardly after Kaine challenged him on his running mate’s comments. The Democrats, Pence said, were running an “insult-driven campaign.”

Aides to Clinton said their pre-debate plan was for Kaine to thrust Trump into the center of the stage at Longwood University. But the role was not a natural fit for the ebullient and twinkle-eyed Kaine, who repeatedly cut off both Pence and moderator Elaine Quijano and missed landing planned zingers in the fray.

“You are Donald Trump’s apprentice,” shot Kaine early on in the night, a line lost amid the squabbling. “If you can’t meet Nixon’s standard —” Kaine said in an answer about Pence’s taxes before trailing off.

For Republican Party stalwarts, Pence’s on-message performance was a mirage of the candidate who might have been, had they chosen a more conventional nominee. Clinton’s allies quickly said Pence was preparing for a presidential run in 2020, and even Trump’s official surrogates seemed to muse about a reversal in roles.

Would Pence do better at the top of the ticket than Trump? a reporter asked in the spin room at Longwood University after the debate. “If that kind of chain of events were to happen, I think he’d be ready for the job,” said Matt Schlapp, chair of the American Conservative Union.

And there were moments of awkwardness for Pence. The vice-presidential candidate said he supported a no-fly zone in Syria that would restrict Russia and Bashar Assad’s movement in the air. Trump has said, meanwhile, he welcomes Russian involvement in Syria.

The debate also raised at least one difference between Kaine and his running mate: the Virginia Senator supports the Hyde Amendment, which bars the use of certain federal funds for abortions, while Clinton supports it. Pence raised Kaine’s disagreement with his boss at the end, and Kaine — a devout Catholic — responded with an earnest defense of his support for abortion.

Pence’s deliberate performance won’t necessarily rub off on Trump, who faces the test of whether he can internalize the lessons by Sunday’s second presidential debate. Trump, an incorrigible improviser, is not known as a quick study. “It’s not about learning,” Boris Epshteyn, a senior adviser to Trump, said after the debate. “Donald Trump’s always said he’s going to surround himself with the best people. That was a perfect representation of that.” 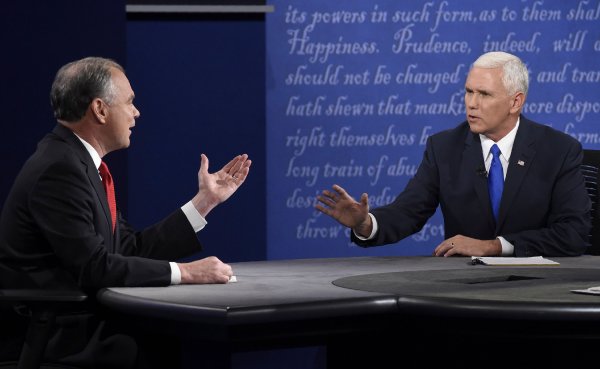