The relative low stakes of Tuesday’s Vice Presidential debate left the campaigns some wiggle room to get creative with their online strategy.

While Democrat Tim Kaine duked it out with Republican Mike Pence, a battle of sorts raged online between campaigns competing for eyeballs, retweets and likes—even the third-party candidates joined in on the fun.

While his running mate was on stage, Republican nominee Donald Trump let his Twitter fingers fly, live-tweeting the debate from Nevada. Trump kicked things off with a bang, going directly at Fox News anchor Megyn Kelly, who questioned if Trump was actually sending his own tweets, CNN’s Brian Stelter reports.

The Clinton campaign took the chance to take potshots at Trump over Twitter to rebut the action on the screen. When Pence suggested that the Republican ticket was not running an “insult-driven campaign,” the @HillaryClinton account pointed to the billionaire’s tweets.

The independent VP candidates, who were not invited to Tuesday’s debate, also got in on the online action. Green Party VP nominee Ajamu Baraka participated in a airing of the debate broadcast where he cut into the stream and responded in real time.

Clinton and Trump ended the night online congratulating their running mates—each with their own flare. 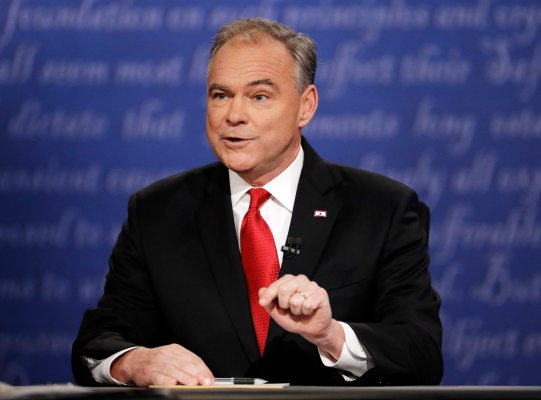 Kaine Brought Zingers to the Vice Presidential Debate
Next Up: Editor's Pick