Just over a week after Donald Trump and Hillary Clinton faced off before a record audience, the Democratic and Republican vice presidential nominees took the stage Tuesday night in Farmville, Va.

The relatively unknown Virginia Sen. Tim Kaine and Indiana Gov. Mike Pence have been historically minimalized this cycle as the universally known candidates at the top of the ticket have consumed all the oxygen in the campaign. And barring any embarrassing moments, Tuesday’s debate will be a mere footnote in this most unusual campaign.

The debate began with the two running mates repeatedly interrupting and talking over each other, leading moderator Elaine Quijano to scold them in the first half hour.

Their contest provides an opportunity to introduce themselves to the broader American public, and to fulfill their well-defined campaign roles. But the more interesting debate may be the one taking place in the wings of the debate hall tonight, as both running mates struggle to patch over their differences with the top of the ticket.

On the debate stage, both took expected pot shots at their rivals, with Kaine in particular relying on scripted zingers. “You are Donald Trump’s apprentice,” he told Pence at one point.

Kaine, the affable, harmonic-playing former Governor, is a traditional running mate, balancing the ticket geographically and helping to secure a swing state. His genial, uncle-like temperament is designed to balance Clinton’s almost robotic focus on securing the White House. While he shares most of Clinton’s pragmatic approach toward domestic policy, he has expressed disagreements with his running mate on the Trans-Pacific Partnership (though he recanted his support upon joining the ticket) and on his more dovish approach to overseas conflicts. Kaine has repeatedly clashed with the White House over its reliance on outdated congressional approvals to justify military actions in Iraq, Syria, and Libya. He also differs from Clinton in his support for the Hyde Amendment, which bans federal funds from being used to provide abortions.

Pence, a conservative darling and former member of Congress, has assumed the role of cleanup man for Donald Trump, as he has tried to reassure Evangelical Republicans that Trump can be trusted. His plain demeanor couldn’t be more different from Trump’s bombast, and he has struggled to answer for Trump’s insults in interviews over the past three months. Pence, too, has been a supporter of TPP, as well as comprehensive immigration reform—both opposed strenuously by Trump.

For both Kaine and Pence, their primary responsibility is to avoid doing harm to the top of the ticket, and this year that will be harder than ever. 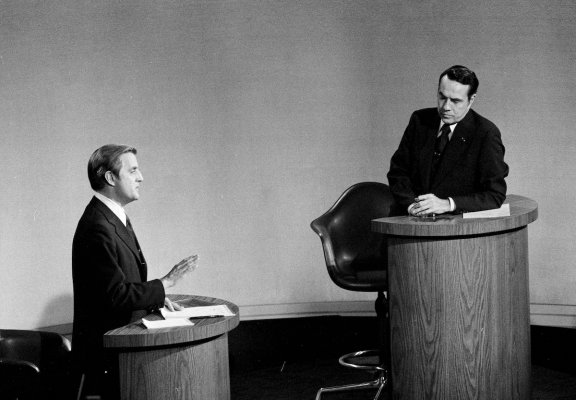 Here's What Happened at the First-Ever Vice-Presidential Debate
Next Up: Editor's Pick