Kim Kardashian arrives to her Manhattan apartment after being robbed in her Paris, France hotel room on Oct. 3, 2016 in New York City.
James Devaney—Getty Images
By Char Adams / People

Police in France say the robbers who attacked Kim Kardashian West in her Paris hotel room on Monday likely posed as paparazzi to tail her before the crime.

The 35-year-old reality star was robbed at gunpoint early Monday at the No Address Hotel in Paris by masked men dressed as police officers. Multiple sources have since confirmed to PEOPLE that authorities in France believe she may have been under surveillance in the days leading up to the attack.

One security expert tells PEOPLE that Kardashian West’s super public lifestyle may have made it easier for the would-be criminals to track her whereabouts without being noticed.

“She’s surrounded by paparazzi, any of whom could have given this information to others for a fee,” Christopher Hagon, a managing partner at Incident Management Group, a Florida-based international security consulting firm, tells PEOPLE.

The robbers tied the mom of two up and put her in a bathroom while they made off with two cellphones and nearly $11 million worth of jewelry, including a $4 million ring.

Hagon, a former security guard for the royal family, says if the star is often surrounded by paparazzi and fans, “she needs a robust celebrity or personal protection plan that takes everything into account.”

“She could have disrupted [BRACKET “her”] routine … she could have said, ‘I’m going to this apartment …’ Then she could have, at the last minute, gone somewhere else,” the expert tells PEOPLE.

“In other words, her routine becomes difficult to monitor … so if anyone is surveilling [her], it makes it difficult for them to come up with a firm conclusion about where she is going to be at any given time.”

Kardashian West flew out of Paris and back to the U.S. on a private jet just hours after the robbery. And a source close to the family says the reality star left as soon as she had answered all of the police’s questions.

“She just wanted to be with [her] husband and kids,” the source tells PEOPLE. “French authorities have been contacting her through the family.

Hagon previously told PEOPLE that Kardashian West must have a top-notch security plan to match her public lifestyle. And the source tells PEOPLE that, following the incident, the star will have a “much heavier security team.” 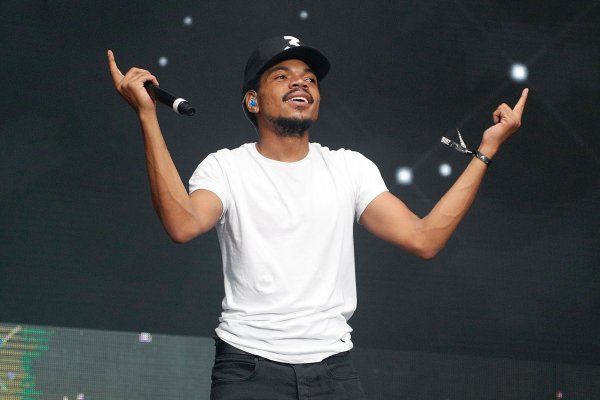 Watch Chance the Rapper Sing the New Kit Kat Jingle in a Bear Costume
Next Up: Editor's Pick