Hillary Clinton railed against Donald Trump’s financial practices in Toledo, Ohio, as she sought to undercut his populist appeal in a state where polls show the race nearly tied.

The Democratic nominee focused on the news that Trump lost $916 million in a single year, according to tax records obtained by the New York Times, charging that they undermine his campaign message.

“Trump represents the same rigged system he claims he will change,” Clinton said. “While millions of American families were working hard and paying their fair share, it seems Trump wasn’t contributing anything to our nation.”

She painted Trump as the paragon of greedy business owners, saying he’s “taken corporate excess and made a business model of it.”

“He abuses his power, games the system and puts his own interests ahead of the country’s,” Clinton said. “It’s always Trump first, and everyone else last.”

Trump’s massive losses in the mid-1990s came after failed investments in Atlantic City casinos, a Trump-branded airline and other ventures. The losses mean that Trump may not have paid income taxes for as many as 18 years — a claim the Trump campaign has not denied.

In a jab directed squarely at Trump, Clinton said she supports a law that would require presidential nominees to release their tax returns. Trump has broken with four decades of practice for presidential candidates by refusing to do so, claiming that his lawyers advised against it because he is being audited.

Clinton’s remarks were aimed directly at the residents of Toledo, a former industrial hub in Northwestern Ohio that has been hit hard by the financial crisis. A decent-size crowd of more than 1,100 came to Clinton’s event with hundreds in overflow and waiting outside. Clinton said Trump opposed the 2009 auto bailout and would have left the city to suffer during the crisis.

The former Secretary of State has been struggling to frame her campaign in places like Toledo. She has argued that her plans, including corporate profit-sharing, new apprentice and worker training, a minimum-wage increase and guaranteed paid leave would boost middle-class wages, but Trump’s economic populism on trade has boosted him here.

To counter that message, Clinton has called for increasing trade enforcement, and on Monday in Toledo repeated her call for a “chief trade prosecutor” and tripling the number of officers. But her campaign also sought to turn Trump’s business past against him.

Clinton noted that the real estate mogul has been sued by a wide array of contractors who accused him of nonpayment for projects in Atlantic City and elsewhere, as well as by people who said they were cheated by Trump University.

“Trump was taking from America with both hands and leaving the rest of us with the bill,” Clinton told the crowd in Toledo. “After he made all those bad bets and lost all that money, he didn’t lift a finger to protect his employees, or the small businesses and contractors he’d hired.”

Clinton’s populist call comes following a full-court press by the liberal wing of the Democratic Party on the airwaves and in battleground states. Elizabeth Warren has stumped for Clinton, and Bernie Sanders has defended her repeatedly on television and traveled to New Hampshire, Ohio, Iowa, Minnesota and other states to campaign for Clinton.

Clinton’s speech was delivered by a candidate who has not always been comfortable being a spokeswoman for the economically anxious and angry. But on Tuesday she quoted her “friend” Sanders, and she called out the wealthy and unpatriotic business owners for moving businesses overseas.

“We have been moving off track for decades. But it is time to get back on track,” Clinton said.

And she returned to her familiar comfort of her father’s story: Hugh Rodham was in the drapery business, and Clinton often recalls how he would “work the silkscreen” in their suburban Chicago home.

“Sometimes he’d let me help with the squeegee,” Clinton said. “That was my favorite part. I know he worked really hard. He believed in hard work. He passed that on to me.”

The message connected with at least one voter in the crowd.

“I believe that based on her path as someone who’s not from wealth that she has been misled by wealth,” said Jennifer Harvey, a former librarian from Bowling Green who pointed to Clinton’s time on Walmart’s board and her paid speeches. “But I think she’s learned from her past mistakes and that she will be more progressive in the future.” 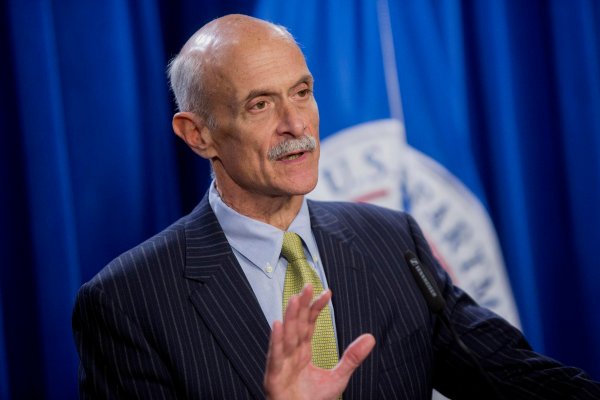 He Once Pursued the Clintons as a Prosecutor. Now He's Backing Hillary for President
Next Up: Editor's Pick