Almost exactly a year ago, the Taliban made global headlines with the capture of Kunduz, the northern Afghan city that had been the insurgents’ last stronghold during the U.S.-led invasion of the country in 2001. Though short-lived—local forces, backed by U.S. airpower, dislodged the militants in a matter of days—the raid underlined the growing ferocity of the Afghan insurgency. Nearly a decade-and-a-half after the American invasion, and less then a year after the end of NATO’s combat mission in Afghanistan, the fall of Kunduz sharpened concerns about a troubling Taliban resurgence in the war-torn country.

On Monday, the militants were back, launching a pre-dawn raid on Kunduz and attacking government offices after reportedly re-entering the city that serves as the capital of a province of the same name. There were also reports of fierce battles between the Taliban and government forces in the south of the country, where, in a coordinated attack, insurgents overran a district in Afghanistan’s Helmand province.

The attacks came as the Afghan leadership geared up for a major international donors conference in Brussels, where Kabul is hoping to secure billions of dollars in assistance as it attempts to repel the insurgency and rebuild the country. Secretary of State John Kerry and United Nations Secretary-General Ban Ki-moon are expected to be among the representatives of more 70 countries who are due to attend the two-day conference that begins Tuesday.

As the reports of the Taliban’s latest assault on Kunduz filtered out, the NATO mission in the country said U.S. air power was “in position and prepared to assist in Kunduz as needed,” adding:

An Afghan defense ministry official said local forces had launched airstrikes on insurgent positions and were fighting the Taliban. “I totally reject claims that the Taliban have taken over Kunduz city,” the ministry’s spokesman Dawlat Waziri told the Associated Press. On the ground, a member of the local provincial council added that Afghan forces still controlled the airport and a number of local government buildings, including the police headquarters and offices of the Afghan intelligence agency, telling the AP: “Intense fighting is going on right now at the governor’s compound and the [intelligence agency] office.”

In July, a stronger Taliban had forced President Obama to revise his plans for the withdrawal of American troops from Afghanistan, with the White House saying he would leave 8,400 U.S. personnel on the ground when he leaves office early next year. With American troops in the country currently numbering about 9,800, Obama had earlier planned to reduce the U.S. deployment to 5,500 by the end of 2016. “The security situation in Afghanistan remains precarious,” he said, adding that “the Taliban remains a threat.”

With violence intensifying, the number of Afghan civilian casualties has remained at record highs, with more than 1,600 people killed and more than twice as many injured in the first six months of the year. Close to a third of those killed were women and children, according to a recent U.N. report, with 388 children dying in the first half of 2016—up 18% from the previous year. 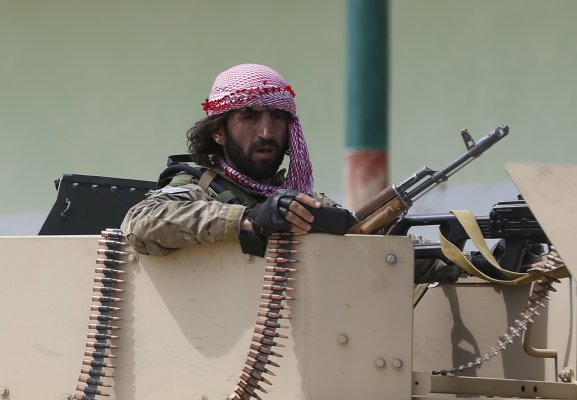 Afghan Taliban Launches Offensive Against City of Kunduz
Next Up: Editor's Pick