Jonathan Dunne, who moved to London from Colorado in 1997, created 'Tube Chat' badges and gave them out in London Underground stations to encourage commuters to talk to each other
Jonathan Dunne
By Jonathan Dunne

I moved to London from Colorado in 1996 to study and have been living here more or less since then. My wife, who is from a small town in Kansas called Coffeyville, and I live in Harringay, in north London. I spend around 35 minutes on the London Underground, or the Tube, to and from my job as an administrator at the National Health Service (NHS). It’s a pretty miserable journey.

One thing about London I’ve noticed is it’s really difficult to get people interested in stuff. I think this attitude is a London thing; it’s the culture not to get involved. Sometimes I’ve seen people on the street that I’ve worked with for years but we ignore each other – seeing people you know outside of work seems to be so distressing to English people!

Over the Olympics, a colleague from New Zealand and I planned a sports day. I’m on the social committee at work and I enjoy planning events. It was a catered event on a Friday afternoon, and even though it would mean a few hours off work only 30 people turned up – out of a couple of hundred.

I was really disappointed; I’d worn shorts to work and everything. I’d arranged for ice cream to be brought out at the end of the event, but everyone left right at 5pm. I ended up with about 50 ice creams – I was giving them out to people on the street.

The same thing happened on International Bacon Day. We organised for there to be bacon sandwiches as well as bacon-themed games, like Six Degrees of Kevin Bacon. But everyone just ate the sandwiches and split.

So I came up with an idea for people to opt in to being social in the one place where Londoners spend a lot of time — the Tube. I decided to hand out free buttons that said ‘Tube Chat’. Then, when people saw someone wearing a button they could strike up a conversation if they wanted to.

I designed the buttons in the classic Transport for London (TfL) style on a website and ordered 500 for £100. Handing them out was not as fun as I thought it would be. I tried to give them out at rush hour in Old Street station, but other vendors kept telling me I was in their space. I’d designated an hour to get rid of 500 – but after two and a half I’d only done 480.

The next day, I told my colleagues and we had a laugh about it. But, while I was in a meeting, the whole thing blew up. I got back to my desk and my phone has literally not stopped ringing since then.

I thought I’d done a nice gesture, but there has been a bit of a backlash. People were handing out buttons in Liverpool Street station this morning that said ‘Shut Up’. I can’t really understand why they’re so bothered about it. One guy has even posted a video on YouTube about how he’s going to punch me in the face. It doesn’t worry me though.

I’ve been thinking about my buttons have made people so annoyed and I think part of it is that I’m American, and we’re in this weird, Brexit-y world. If I’d done this in the U.S. I don’t think anyone would have cared.

But that said, I have also received some support. I’ve had tonnes of messages on Facebook and they are almost all positive, with people asking for me to send them buttons. Originally it was an 80-20 split between people hating the idea and liking it, but now I think it’s more like 50-50. There are always going to be people who are into it and people who are not into it.

TfL apparently aren’t happy about me using their branding, but I haven’t heard from them. However, I have been contacted twice by a curator at the London Transport Museum who wants a button for their collection.

I heard that people were handing out their own buttons last night at Catford station in southeast London; it’s nice to think my idea has had legs. I’ve ordered another 500 to give out, which I’m looking forward to. Since this all took off, I’ve barely been able to come up for breath. The whole thing is just crazy.

As told to Kate Samuelson 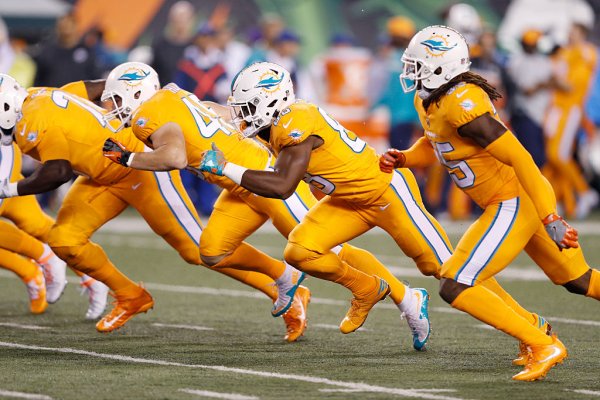 The Internet Had Nothing Nice to Say About the Miami Dolphins' Bright Orange Uniforms
Next Up: Editor's Pick