A commuter train crashed into a station outside in Hoboken, N.J. Thursday morning leaving at least one person dead and 108 injured, including some critically, according to New Jersey Governor Chris Christie.

The cause of the crash is yet to be determined, though officials said that the train entered the station at an unusually fast speed. The train’s engineer survived the crash and is in critical condition, but is cooperating with authorities, Christie said at a press conference Thursday afternoon.

All the passengers have been removed from the train and have been treated at local facilities. The one victim killed was standing on the platform and hit by debris. She was later identified by the state medical examiner as Fabiola Bittar de Kroon. The 34-year-old Hoboken woman was a mother whose child was in day care at the time of the crash, NBC New York reports.

The train—number 1614—was en route to Hoboken from Spring Valley, N.Y. on the Pascack Valley Line, a New Jersey Transit spokeswoman told the Associated Press. The incident occurred at approximately 8:45 a.m. at the Hoboken station and led to suspended commuter rail service in the area. Images posted to social media appeared to show significant damage to the station.

The train stopped in a covered area of the station and a metal structure in the station collapsed, according to the Associated Press. “It simply did not stop,” local news anchor and crash witness John Minko told 1010 WINS. “It went right through the barriers and into the reception area.”

William Blaine, a train engineer who witnessed the immediate aftermath of the crash, described a gruesome scene with an apparent dead body and people with “gashes in their head.”

Emergency responders from a number of local authorities had gathered at the station including New Jersey Transit Police, Port Authority Police, New Jersey State Police and officers from the nearby communities of Elizabeth and Union City. Christie said that civilians in the station pitched in to help emergency officials pull passengers from the train. A Jersey City Medical Center spokesperson said the hospital was prepared for the incident and is expecting approximately 40 patients.

Christie said that the state attorney general’s office will be leading an investigation into the crash coordinating with the National Transportation Safety Board (NTSB) and the Federal Railroad Administration. Engineers are on the scene investigating the structural integrity of the station, according to Christie.

Presidential candidates Hillary Clinton and Donald Trump expressed sympathy on Twitter for those affected by the crash.

Hoboken is located across the Hudson River from New York City and many of its 50,000 residents commute to Manhattan using New Jersey Transit’s buses and trains.

With reporting from Tara Johnson / Hoboken 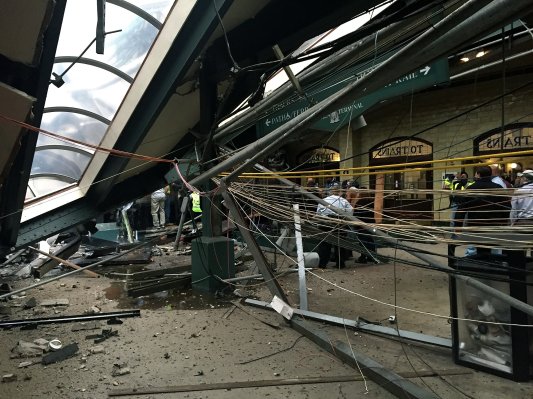 Train in New Jersey Transit Crash Did Not Have Automatic Brakes
Next Up: Editor's Pick