Andrea Arnold’s American Honey–a fictional story drawn from real life, about marginalized teenagers who sell magazine subscriptions door to door–pinpoints issues that every American needs to think about: our country is so fractured that prosperous citizens can spend their whole lives tucked away in well-manicured neighborhoods, while just a few miles off, a little kid is opening the door to an empty fridge.

But there’s a fine line between dramatizing human circumstances in a way that leaves us shaken or joyful, or both, and making a carefully calibrated sociology project. American Honey, its good intentions aside, tilts toward the latter. Star (Sasha Lane) is a teenager living somewhere in the Midwest, a young woman who resorts to dumpster diving to feed the two small children in her care (and they’re not even hers). She’s dazzled when a pack of those magazine-selling teens comes through her town–they live a life of freedom she can barely imagine–and the charisma of their best salesman, Jake (a shambling, seductive Shia LaBeouf), doesn’t hurt. So she takes off with them, hitting the road in their van: in the daytime, they fan out through fancy neighborhoods and sometimes through distressed ones, hawking a product that they know no one wants. At night, they pile into cheap hotel rooms paid for by their exploitative boss, Krystal (a magnetic, take-no-prisoners Riley Keough), whose management style is as hard and precise as the tight little rings of liner around her eyes. They also party, hard. And they fall in love: the attraction between Jake and Star, who’s gentle and generous but nobody’s fool, is immediate, and their love story is the movie’s most potent ingredient.

Arnold, who is English (and who has made some astute, beautiful pictures, like the 2009 Fish Tank), wrote American Honey after traveling through the U.S., alone, on a number of road trips. Meticulously shot by Arnold’s regular cinematographer, Robbie Ryan, the film folds in lots of documentary-style details, from moths clinging to drifty cotton curtains to shacks masquerading as homes with moldy ceilings and dishes piled high in the sink. Arnold, who cast the movie largely with unknowns, also has a knack for finding great faces: Lane’s Star, with her soulful eyes and a pout like a stubborn cherub, is the movie’s center–you can’t help feeling for her.

Yet there’s something belligerent about Arnold’s approach, in the way she shows us flies buzzing around a dirty counter or a precocious little girl, living in seemingly hopeless circumstances, who has committed to memory the lyrics of the punk song “I Kill Children” by Dead Kennedys.

Over and over, American Honey calls attention to how observant it is, rather than just being observant. It’s as if Arnold assumes that we wouldn’t be able to care about kids trying to change their lives by fighting for scraps dropped from the capitalist table. American Honey trusts more in our heartlessness than in our compassion. Even if–maybe especially if–that’s a tragically accurate assumption, bullying us into caring isn’t going to help. 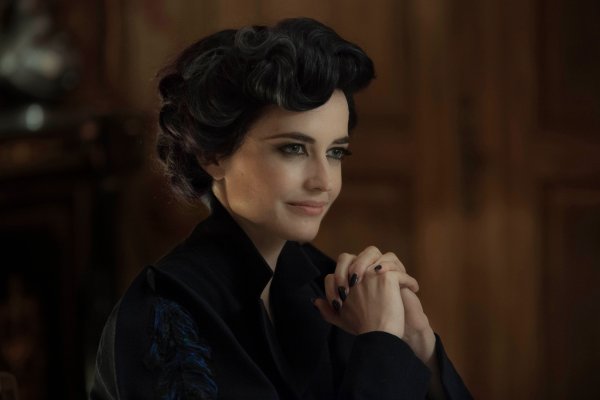 Tim Burton Loses the Plot in Miss Peregrine’s Home for Peculiar Children
Next Up: Editor's Pick