The Prepared Candidate and the One Who Is Still a Child

I prepared for the first Clinton-Trump debate by watching Citizen Soldier, a riveting documentary about the Oklahoma Army National Guard in combat in Afghanistan–and by not watching any of the pregame commentary by the talking heads. I wanted to see the debate with those young men in my mind: mechanics, oil-field technicians, cops and even a marketing executive, who chose to serve their country in a combat hellhole. I did it because the most important quality of a Commander in Chief is the sobriety to make life-and-death decisions, rather than the ability to bluster and zing.

I had doubts about both candidates in that regard. Hillary Clinton had, after all, sent the Oklahomans into Afghanistan by supporting President Obama’s expansion of the war–which I also mistakenly backed–and the sight of these young men in the film chasing shadows and getting blown up by ghosts was devastating. Not a single enemy combatant is seen up close during the course of the film, but two soldiers are killed, including a beloved lieutenant leading from the front.

Clinton also was wrong about Iraq and, worse, about Libya, where she instigated a mission that had no Phase IV–the military term for occupation and stabilization operations after the battle is won. But then, there isn’t a politician, pundit, soldier or spook who hasn’t been wrong at some point about this endless, vexing campaign against radical Islamist terrorist groups. The question of whether she was prepared to lead the next phase of the conflict wasn’t answered in the debate, but Clinton certainly showed that she understood the subtlety of these issues. “Words matter,” she said after Donald Trump implied that national security was a financial transaction, that if our allies–NATO and the Japanese and the Koreans–didn’t pony up, he would leave them to their own devices, which might mean the development of nuclear weapons. Then she assured our allies that we wouldn’t abandon them. She did not say, “Unlike Trump, I won’t abandon you.” The pledge was too serious for politics. It was a fine moment.

In fact, her most impressive moments came when she wasn’t talking, when she was on split screen listening to him. She didn’t waver; she listened with a perfect combination of attention and ironic bemusement, with just the slightest hint of “What a jerk” flickering at the corners of her eyes and her mouth. This, too, is a crucial quality in a Commander in Chief. There are more than a few world leaders, friend and foe, who don’t deserve to be taken seriously but have to be.

Trump, by contrast, huffed and puffed and sniffled and sighed and groaned and mugged and drank water and interrupted, rudely, repeatedly. He made not one solid, specific proposal during the course of the 90 minutes. Others have pointed out his myriad missed opportunities, but the greatest of those was the chance to appear as a solid, controlled Commander in Chief.

He came to the stage as the Republican nominee armed with an important argument–that we had rushed into too many wars, that we had acted imprudently and, in particular, that the war in Iraq was a terrible mistake. He could have said, “Yeah, look, in an early conversation with Howard Stern, I took a casual, hypothetical position in favor of the war–a lot of people did–but the more I thought about it, the more I realized what a disaster this would be.” But Trump simply doesn’t have the grace or soul or muscles to admit a mistake. Instead, he suggested that finding a way to avoid paying federal taxes was “smart.” He said that rooting for the housing crash was merely a matter of business, rather than utter amorality. On the moral spectrum of selflessness, he is at the very opposite end from the Oklahoma soldiers.

He talked about Rosie O’Donnell. He threatened to talk about Bill Clinton’s infidelities. He talked about Sean Hannity. He talked about himself, relentlessly. He claimed that he had persuaded our European NATO allies to take terrorism more seriously, as if the attacks in Paris, Brussels, Germany and Turkey had nothing to do with it. He seemed a child.

I don’t know how many votes were changed by Trump’s dismal performance. But Clinton didn’t lose any votes with hers. And the format of the next debate, the Oct. 9 town meeting, has traditionally favored the candidate who can successfully engage the citizens asking the questions. Clinton has been holding such meetings for years. It may turn out that her listening tours, oft ridiculed by the press, were the most important debate prep of her life. 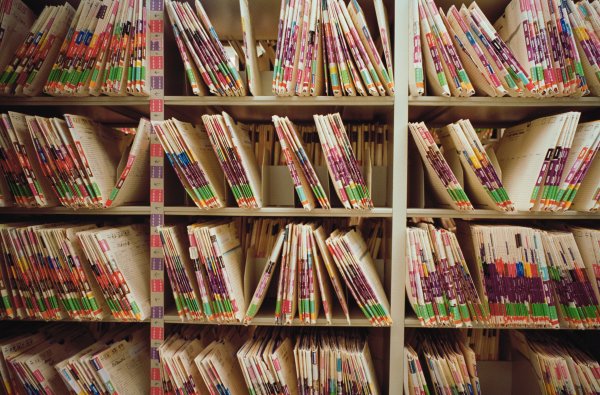 The Medical Records You've Been Waiting for Are Right Here in This Column
Next Up: Editor's Pick