U.S. Says it Will End Syria Talks with Russia Unless Bombing of Aleppo Stops

A woman sits amid damaged buildings in the rebel-held al-Myassar neighborhood of Aleppo, Syria, on Sept. 27, 2016
Abdalrhman Ismail—Reuters
By Feliz Solomon

Secretary of State John Kerry has warned Russia that the U.S. would cease talks with Moscow on Syria and scrap plans for joint-intelligence coordination unless Russia and Syrian forces stop bombing the city of Aleppo.

Kerry called his Russian counterpart, Foreign Minister Sergei Lavrov, by telephone Wednesday to deliver the message from the White House, the sternest yet since a ceasefire fell apart after a deadly attack on an aid convoy on Sept. 19.

Syrian forces, with the support of Russian allies, have since bombarded the city with heavy aerial attacks that have been among the worst since the start of the 5-year conflict. Nearly 400 civilians have been killed in the past week, many of them children.

“The Secretary made clear the United States and its partners hold Russia responsible for this situation,” said State Department spokesman John Kirby. “The Secretary stressed that the burden remains on Russia to stop this assault and allow humanitarian access to Aleppo and other areas in need.”

Kirby said preparations were already underway to suspend bilateral engagement with Russia on Syria unless Moscow takes “immediate steps to end the assault on Aleppo.”

Read More: How the White Helmets of Syria Are Being Hunted in a Devastated Aleppo

Russia’s Deputy Ambassador to the U.N., Evgeny Zagaynov, responded that it was “unfortunate” that Moscow had been blamed for hostilities in the besieged city, according to the BBC.

Moscow said Wednesday that they would send representatives to Geneva to discuss normalizing the situation in Aleppo with U.S. diplomats.

About 250,000 people are trapped in the city’s rebel-controlled east. According to frontline health providers Doctors Without Borders, known in French as MSF, there are now only seven surgical doctors left in east Aleppo. Two hospitals were hit in a pre-dawn airstrike on Wednesday, putting both out of commission.

“And this comes at a time when east Aleppo has been under siege since July and is suffering the bloodiest indiscriminate bombing since the beginning of the war,” Carlos Francisco, the head of MSF’s Syria mission, said in a statement. “We don’t know how to say it anymore: This has to stop.” 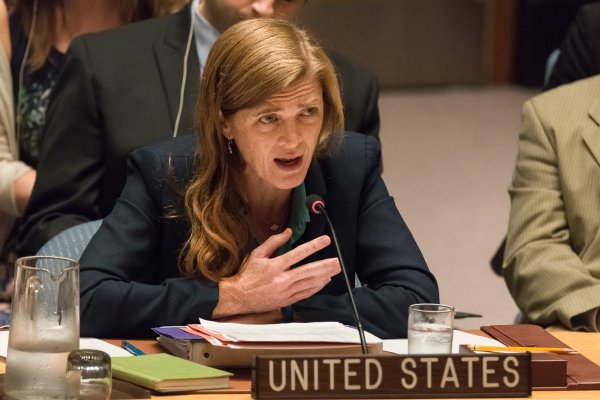 U.S. Blasts Russia's 'Barbarism' Amid New Attacks on Aleppo
Next Up: Editor's Pick