This Is the Domestic Violence Issue No One Is Talking About

It was British Prime Minister Theresa May who astutely said: “You can’t solve a problem as complex as inequality in one legal clause.” This remark comes to mind when we, as lawmakers, deal with combatting the complexities of domestic violence.

We all know that abuse does not always take the same form. Domestic violence often finds expression in means beyond physical assault that are no less injurious. We commonly hear of mental and emotional abuse, for example.

But one form of domestic violence which is less commonly discussed is economic abuse. Economic abuse exists when one partner has control over the other’s access to economic resources. It is when one partner is deliberately coerced into being financially beholden to the other and his/her capacity to be self-sufficient is diminished.

Beyond indignity and humiliation, this is a form of abuse, pure and simple.

Do not think for one moment that this deplorable pattern of behavior is exclusive to lower-income and less-educated households. Recently a friend who is a full university professor told me how her spouse took over all of their joint finances and left her penniless. This case, and others like it, helped me realize how widespread and underreported this type of abuse really is.

In response, I have initiated legislation in the Israeli Knesset (Parliament) designating economic abuse as a criminal offense, punishable by law.

A crime it is, and as a crime, it should be prosecuted.

In a region such as the Middle East, which is infamous for its treatment of women, Israel is proud to be a champion for the empowerment of women and gender equality.

It is an honor to be part of a society where women serve in senior economic positions and in top military roles. A society where Miriam Naor is currently the second woman to serve as Chief Justice of the Israeli Supreme Court and Golda Meir became one of the first women to serve as her country’s Prime Minister as early as 1969.

As a mother, I never want my two young daughters to fear the grievous threats of domestic violence, exclusion and gender discrimination. I want to promise them that as they grow up, they will be free and protected from manipulation, exploitation and abuse.

This is the promise all women and girls deserve, and it is our responsibility to make this commitment a reality.

As Israel’s Minister for Social Equality, I have pledged to fight abuse domestically, in the workplace and in society at large. Liberating women—or men—from abusive partners, who rob them of their hard-earned personal financial rights and freedoms is a social imperative. Such abuse should not—and will not—be tolerated. The legislation I am proposing is a step towards ending such abuse and promoting social equality.

This legislation should not be limited to a handful of countries. I call upon lawmakers, activists and allies in free societies around the world to promote similar measures. Let us together build a universal front to fight back against the most widespread form of exploitation. 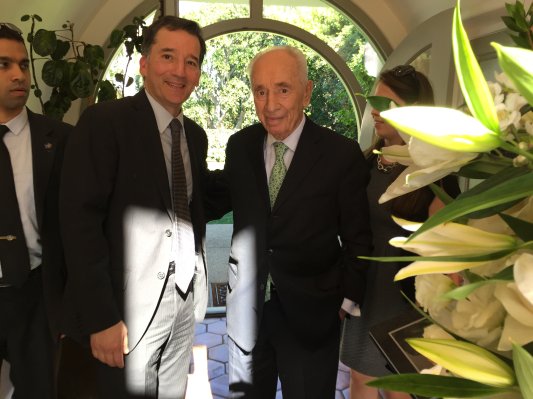 Shimon Peres Left a Legacy of Innovation and Openness
Next Up: Editor's Pick