Democratic Nominee for President of the United States former Secretary of State Hillary Clinton speaks to and meets voters during a rally in Raleigh, North Carolina on Tuesday September 27, 2016.
The Washington Post—The Washington Post/Getty Images
By Michael Beckel / Center for Public Integrity

About one of every nine voters this fall is expected to be Latino. In critical swing states like Colorado, Florida and Nevada, that percentage is likely to be even higher.

That’s why Democrat Hillary Clinton and her allies are taking increased measures to mobilize Latino voters this year.

Since January, the Clinton campaign has sponsored more than 2,500 Spanish language TV ads, according to a Center for Public Integrity analysis of data provided by ad tracking firm Kantar Media, which monitors ads on broadcast television and national — but not local — cable. In Nevada alone, about one of every eight TV ads Clinton’s campaign has broadcast so far this month has been in Spanish.

Clinton herself has advocated for comprehensive immigration reform, including a pathway for citizenship for undocumented immigrants in the country illegally.

Republican Donald Trump, meanwhile, has called for the construction of a wall on the U.S.-Mexico border, mass deportations and the end of birthright citizenship. He’s also called Mexican immigrants criminals and “rapists.” None of his campaign’s TV ads have been in Spanish.

By contrast, President Barack Obama aired more than 13,200 TV ads in Spanish during his 2012 re-election bid, while his Republican rival, Mitt Romney, aired about 3,700, according to a Center for Public Integrity analysis of data provided by Kantar Media/CMAG.

This year, Clinton’s also getting a super PAC assist reaching out to potential Latino voters.

Enter the Latino Victory Fund and El Super PAC Voto Latino, which have taken to the TV airwaves this month and are working in partnership with the main pro-Clinton super PAC, Priorities USA Action. A coordinated ad blitz by the three super PACs has been concentrated on the battleground states of Colorado, Florida and Nevada.

The Latino Victory Fund was formed in May of 2014 as a traditional political action committee to support Latino candidates. Five months later, it transformed itself into a hybrid super PAC — meaning it could still directly donate to candidates from its PAC account, but it could also collect unlimited funds in a separate account to produce political ads.

While officially describing itself as nonpartisan — it is dedicated to building “political power within the Latino community to ensure the voices of Latinos are reflected at every level of government” — the Latino Victory Project’s efforts have largely aided Democrats and its leaders are decidedly partisan.

For his part, Muñoz currently serves as the finance chairman of the Democratic National Committee. And Longoria, who raised more than $500,000 for President Barack Obama’s reelection, herself donated nearly $67,000 in March to the Hillary Victory Fund — a joint fundraising committee that benefits Clinton’s presidential campaign, the DNC and Democratic parties in dozens of states.

Cesar Blanco, a Democratic member of the Texas House of Representatives, is the Latino Victory Fund’s interim director. He took over the job after the Clinton campaign, in June, hired its president, Cristobal Alex, to be Clinton’s national deputy director of voter outreach and mobilization.

At the same time, Maria Teresa Kumar is the president of El Super PAC Voto Latino. A longtime political commentator on MSNBC, Kumar also serves on the national boards of Planned Parenthood, EMILY’s List and the Latino Leaders Network.

Other people behind El Super PAC Voto Latino include Ingrid Duran, the former head of the Congressional Hispanic Caucus Institute, and Robert Raben, who served as the assistant attorney general for legislative affairs under President Bill Clinton.

Both Duran and Raben are also registered lobbyists in Washington, D.C. Duran co-founded D&P Creative Strategies in 2004, and her clients include Comcast and Microsoft. Raben founded the Raben Group in 2002, and his clients include Airbnb, Google and MasterCard.

Duran told the Center for Public Integrity that she became involved with El Super PAC Voto Latino because “the attacks on our community have been appalling.”

Campaign finance records show that the Latino Victory Fund has raised more than $1.1 million since January 2015.

The biggest donor to the super PAC? The political action committee of the Congressional Hispanic Caucus, called the CHC BOLD PAC, which has donated about $340,000.

The Latino Victory Fund’s other top donors include Steyer, the billionaire hedge fund manager and environmentalist, who has given $250,000, as well as a number of labor unions, including the Service Employees Industrial Union ($100,000) and the United Food and Commercial Workers International Union ($55,000).

Additionally, the pro-Clinton super PAC Priorities USA Action has donated $40,000 to the Latino Victory Fund, all of which came last month.

Meanwhile, it’s not yet clear how much money El Super PAC Voto Latino has at its disposal. The super PAC won’t file its first campaign finance report that details its fundraising until next month.

The Latino Victory Fund entered September with about $173,000 in the bank.

For its part, Priorities USA Action entered September with about $41.5 million in the bank.

Justin Barasky, a spokesman for Priorities USA Action, told the Center for Public Integrity that Latino voters in these states are “incredibly important,” which is why the super PAC is “doing so much to make sure these voters come to the polls and vote for Hillary Clinton.”

David Damore, a professor of political science at the University of Nevada, Las Vegas, and a senior analyst at Latino Decisions, a polling and research company, agrees. 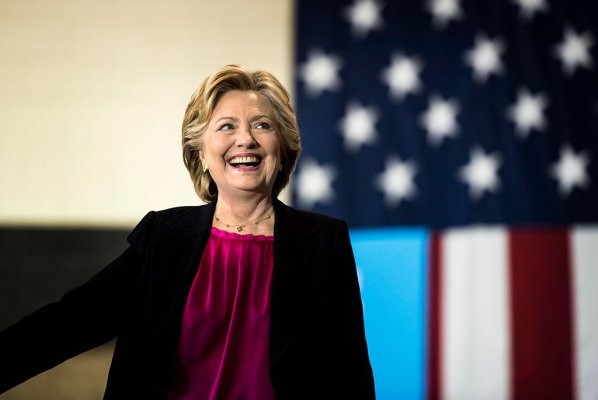