Thai officials have threatened to arrest human rights researchers who were preparing to launch a report alleging that authorities routinely use torture against a range of victims.

Rights group Amnesty International, which authored the report, said Wednesday that a scheduled launch in Bangkok had been canceled after its staff members were intimidated by Thailand’s military government.

The report, Make Him Speak By Tomorrow, details 74 cases of alleged torture documented between 2014 and 2015, claiming that abuse has increased since a military coup two years ago granted broad powers to the armed forces.

Abuses were documented against a broad range of alleged victims including suspected insurgents, political opponents, migrants and people detained by police in rural areas.

Some alleged victims claimed they had been subjected to waterboarding, electric shocks to their genitals, various forms of humiliation and other abuses. Thai authorities have denied the allegations.

At the report launch on Wednesday, which was to be attended by a representative of the U.N. office of the high commissioner for human rights, authorities warned Amnesty’s foreign representatives that speaking publicly at the event would be a violation of Thai labor laws.

An Amnesty Asia representative present at the event, Omar Waraich, said the disruption was likely to bring even more attention to the report.

“It’s pretty sad that the authorities seem to consider human rights activists as more of a problem than perpetrators of torture, who operate with impunity,” Waraich tells TIME. “But the move appears to have backfired, and drawn more attention to the report.”

Thailand’s military junta has a reputation of being sensitive to criticism, and the country’s authorities have a history of allegations of corruption and intimidation of government critics. The country has a number of criminal defamation laws at its disposal and other legal tools that some say have been used to silence dissent.

Last week, British rights activist Andy Hall was found guilty of defaming a Thai company and committing “computer crimes” after he contributed research to a report alleging serious labor abuses in Thai food processing facilities, where many migrant laborers work. The verdict stunned advocates who claimed it could have a “chilling effect” on freedom of expression and human rights reporting in the country. 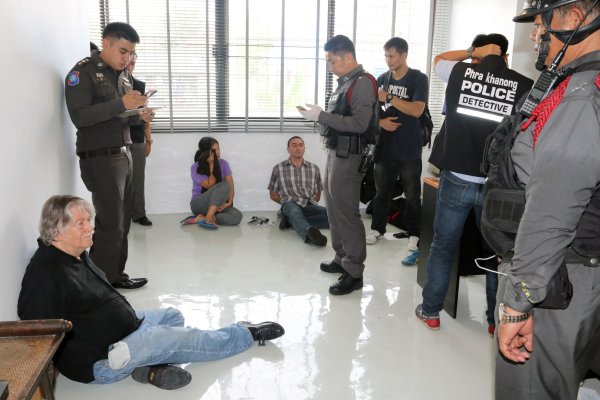