A Few Minutes, and a Selfie, With Shimon Peres

Shimon Peres, former Israeli President and Prime Minister, stands for a portrait at the Peres Center for Peace in Tel Aviv-Jaffa, Israel, Feb. 8, 2016.
Oded Balilty—AP for TIME
By Andrew Katz

In early February, TIME commissioned Associated Press photographer Oded Balilty for portraits of Shimon Peres, the former Israeli statesman who has died Tuesday at 93. Peres wouldn’t have much time, as typical with high-profile shoots, and Balilty wanted to make sure he got what he needed to accompany a reporter’s story. After coordinating with Peres’ office, the reporter’s 45-minute videotaped interview at the Peres Center for Peace in Tel Aviv-Jaffa would be bookended with two very short portrait sessions.

Balilty scoped out the seaside complex a day early. The next morning, he and an assistant set up lights in two different locations. At the first session in the library, “we barely talked,” Balilty tells TIME. “I said good morning. He said good morning. I just directed him where to sit. It was very technical.” Peres was joined by assistants and bodyguards. The photographer was told he would have about three minutes, but in the end he didn’t get much more than one.

After the interview, Balilty and Peres met in the auditorium. There were again assistants and bodyguards, but it was “much more relaxed” than the earlier shoot, he says. “He came in and I told him, ‘You know Mr. Peres, I have shot a lot of these situations in my life, but I must tell you I’m very excited to be taking pictures of you today.'” Peres smiled and “it broke the ice.” After briefly explaining what shots he was aiming for—by the window, on the couch—Balilty heard him say: “‘Whatever you want’—in a good way.” What was supposed to be a three-minute shoot would quickly double.

At the end, Balilty thanked the man for his time. An assistant of Peres then jumped in and said, “You don’t want a picture with him?” Of course he did. Balilty asked his assistant to take the shot, but Peres suggested a selfie.

Balilty had photographed Peres many times before and during his presidency – but always in public settings. Aside from a very brief shot during a television interview after his election as president, this was Balilty’s only real one-on-one portrait shoot. “This is the Israeli politician I admired the most,” he says. “I was always fascinated by his speeches and the way he talked.”

“A lot of Israel is like me today,” he says. “We feel like the grandpa of this country is gone.” 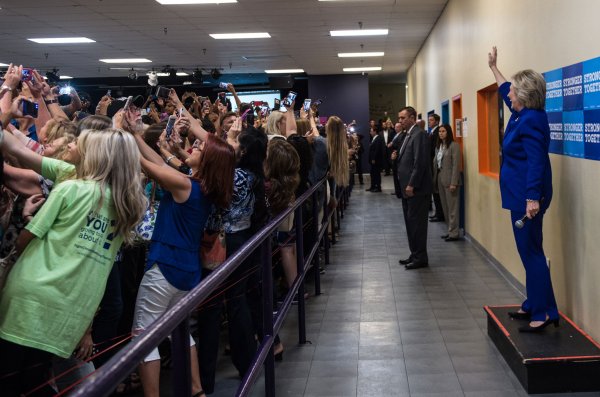 The Story Behind Hillary Clinton's Epic Group Selfie
Next Up: Editor's Pick