How does a man whose brand is all about winning come to terms with defeat? After a widely panned performance in Monday’s inaugural presidential debate, Republican presidential nominee Donald Trump gave several contradictory answers.

At a rally with nearly 10,000 people in a hangar on the Florida Space Coast on Tuesday night, Trump repeatedly claimed victory, berated the media for covering his loss and offered excuses for his performance.

“I was also holding back, “ Trump said, in the familiar wording of a vanquished schoolyard bully. “I didn’t want to do anything to embarrass her.”

Trump went into Monday night’s debate in hopes of proving himself presidential before an audience that topped more than 81 million people on television alone. But over the course of 90 minutes, he grew impatient and fell into predictable traps set by his Democratic rival. Hillary Clinton’s weeks of preparation showed, as she deftly provoked a man who has never handled such prodding well.

Although supporters cast the outcome of the debate on predictable lines, pundits and insiders on both sides of the aisle generally agreed that Clinton won the face-off. A CNN poll of debate watchers found the same result, as did a focus group of undecided voters led by veteran GOP pollster Frank Luntz.

It has not been easy for Trump to come to terms with the setback. The Republican nominee, who traded his moniker “Crooked Hillary” for “Secretary Clinton” for the debate, brought his old insult back in force Tuesday evening — seemingly craving the adoration of the crowd he’d missed.

“We’re going to get rid of that crooked woman,” he said, using a version of the phrase at least a dozen times. “She’s a crooked woman. A very dishonest woman.” The crowd rewarded him with more than a half-dozen chants of “lock her up,” a staple of his rallies.

Trump tried to explain his calmer, but still irritable, demeanor as a sign of having the jitters before such a large audience. “I took a deep breath and I pretended I was talking to my family,” he said.

Directly after the debate, Trump became the first major party presidential nominee in memory to personally try to spin his own performance. Surrounded by hundreds of reporters in the so-called “spin room” outside the debate, he claimed he had a defective microphone and said he didn’t want to bring up Bill Clinton’s indiscretions with Chelsea Clinton in the room.

By Tuesday morning, his response was more elaborate. Speaking to Fox and Friends, he gave Hillary Clinton a “C+” in the debate but refused to give himself a grade, and in a time-honored ploy by the loser, he blamed the moderator, NBC’s Nightly News anchor Lester Holt.

At his first postdebate event, a carefully scripted faux town hall in Miami, Trump cited a flurry of unscientific online reader polls that showed him winning — in some cases because his supporters rallied online to vote more than once.

“I think we did very well,” Trump said. “We won every poll.” Then he corrected himself. “Virtually every poll: except for CNN,” he continued of the network’s rigorous poll that showed him at a 2-1 disadvantage. “No one watches CNN.”

He added that his performance was “big league.”

But it was at the rally in Melbourne that Trump’s true discontent was apparent. Then in nearly point-by-point fashion off a teleprompter, Trump recounted the debate topics, revised his answers, and tried to offer some of the same falsehoods.

“Does everybody believe me?” Trump asked. “I was against going into Iraq. And it’s so well documented.” (His only public statement from the time of the war’s start — to radio host Howard Stern — was in support of the war.)

Trump also sought a bit of a redo, alternating some of the kinds of lines he could have used against Clinton in the debate with more excuses for why he didn’t perform better. “She’s an insider, fighting only for her donors and insiders,” Trump said.

“The MC was arguing with me, taking up a lot of time,” Trump complained of his inability to make his points. He doubled down on Clinton’s “bad experience” and finally worked up a retort to Clinton’s counter that her global travels as Secretary of State proved her stamina and preparedness for the job of President.

“She traveled all over the world, but you know what it got us? Nothing,” Trump said. “It got us debt. And debt.”

Trump also worked to correct his failure to press Clinton handling of classified information on her private email server and neglecting to mention his plans to build a wall on the U.S.-Mexico border. He called it Clinton’s “greatest achievement” that she avoided criminal charges in the email probe, and led the crowd in a chant of “build that wall.”

As the audience quieted he wound up crowd for the pièce de résistance: “Are you ready? Are you ready? And who is going to pay for that wall?” The crowd responded: “Mexico.”

But even as he spun away a loss, Trump bragged about one final win. “We have the biggest day we ever had because of the success last night,” he told supporters. “Because of the debate, they raised almost $18 million today. That’s a lot.” 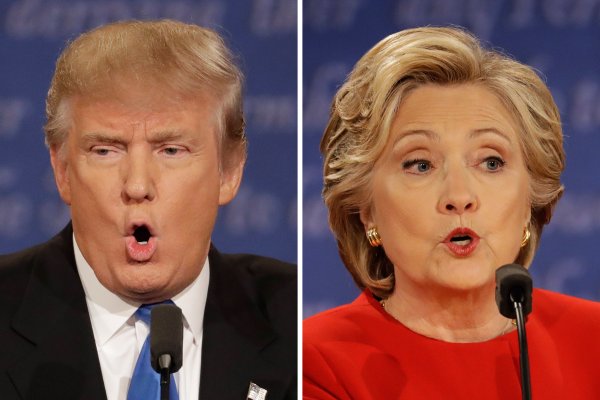 All the Times Donald Trump Interrupted Hillary Clinton and Lester Holt
Next Up: Editor's Pick