Padma Lakshmi Talks Spices, Herbs and What to Eat After the Emmys

Padma Lakshmi has been keeping very busy: The Top Chef star recently filmed the 14th season of the hit Bravo show, visited the Emmys where it was nominated for Outstanding Reality Competition Program (The Voice ended up winning), and is about to publish her fourth book, The Encyclopedia of Spices & Herbs: An Essential Guide to the Flavors of the World. TIME caught up with the multi-hyphenate talent ahead of the Emmys to talk about the new book, her post-show meal and her favorite restaurant in Charleston, the location of the next season of Top Chef.

TIME: Why write about spices and herbs?

Lakshmi: I’ve always been fascinated with spices and herbs. I think it is the class of ingredients that can transform your cooking from mundane to exciting and eclectic. They’re really the unsung heroes of your pantry, and you probably have spices already lurking in your cupboard that you don’t even use that you can get at any supermarket. Yes, there are some funky spices in the book because it’s a reference book so we wanted to be as comprehensive as scientifically possible. But I just think that it’s easy to make something taste good by putting a lot of fat in it, and we’re all trying to be more plant-based and more healthy, and spices are a wonderful way to make your food not only healthier but way more delicious. There’s a world of flavor that we have at our disposal that we just don’t use.

What’s the spice or herb you cook with most?

There’s a few. I would say of course sambar powder because it’s from South India and that’s what feels like my home cooking, but I love sumac. Sumac is wonderful because first of all it has this gorgeous vermillion color, and it’s also one of the rare spices that you can use to add tartness or acid to a dish without adding moisture. Usually we add vinegar, or lemon, or lime, but it’s a beautiful, bright, fruity tartness that you can use to flavor your food when you’re doing something dry. It’s lovely, it has a great texture to it, it’s ubiquitous in Middle Eastern cultures. It used to be grown and used here in America a lot more by the Native Americans, they used to make cough syrup out of sumac berries, and we’ve lost touch with that. I also really love, for instance, Szechuan peppercorns, and I know we’re finding out about them now because Chinese food is having this revolution where they’re going back to these things, but a little Szechuan peppercorn goes a long way. And it’s a warming spice that’s great in the fall, like it would be wonderful, for example, to use with sweet potatoes to give it a different kick that’s different than just chili.

Top Chef is once again nominated at the Emmys. What will you eat before and after the show?

I probably won’t be eating much before—I am in heavy Emmy training so I’m trying not to eat too much. But I can tell you what I’ll be eating after the Emmys: probably a cheeseburger and some nachos even before midnight hits.

Where do you get that?

They usually have In-N-Out burgers at the after party, so they’ll come around with these little handcarts. But I have been known to stop off at Taco Bell on Beverly Boulevard. I’ll just be released from my dietary torture. I’m still trying to shed the Top Chef pounds because I just stopped filming recently and, you know, what it takes me six weeks to gain, it takes me at least 12 or 15 weeks now to [take off]. It’s a sad truth.

I know the next Top Chef season is in Charleston. What’s your favorite restaurant there?

Gosh, I would say Minero. It’s a taco joint by Sean Brock. He just turned his private dining room from McCrady’s into this taqueria and it’s delicious. In fact I liked it so much that I demanded the recipe for one of his salsas, because it reminds me of an Indian chutney we make. Which is also interesting about the spice book, is that you see so many parallels in cuisines throughout the world, like South American food and Mexican food in particular has a lot in common with Asian food, because the climate is the same, so the same things grow. So this hot sauce that I fell in love with at Sean’s Mexican restaurant, I loved it because it reminded me of a chutney I grew up with. Now we make it at home all the time, and my family just thinks it’s Indian, and I haven’t changed it at all! 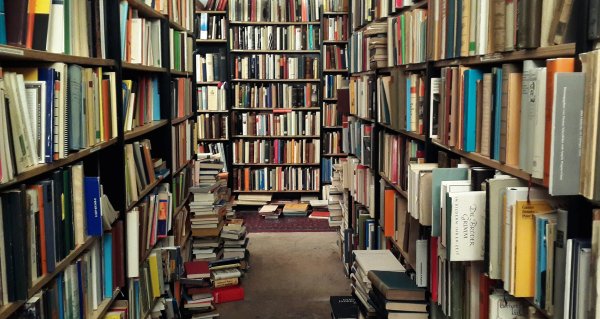 What the List of Most Banned Books Says About Our Society's Fears
Next Up: Editor's Pick