Republican presidential nominee Donald Trump pauses during the Presidential Debate at Hofstra University in Hempstead, N.Y., on Sept. 26, 2016.
Drew Angerer—Getty Images
Ideas
By Natasha Camhi and Ames Grawert
Natasha Camhi is the special assistant to the director of the Justice Program at the Brennan Center for Justice at NYU School of Law

Grawert is a counsel in the Justice Program and the John L. Neu Justice Counsel at the Brennan Center for Justice, and co-author of "Crime in 2016: Updated Analysis."

Anyone who watched Monday night’s presidential debate might think we’re losing the war on crime. “We have a situation where we have our inner cities, African-Americans, Hispanics are living in Hell because it’s so dangerous,” Donald Trump said. “You walk down the street, you get shot.”

It’s a scary notion. But it’s simply not true.

New data from the Brennan Center for Justice show that crime remains near all-time lows, and despite an increase in murder in a handful of cities, America is still safer today than it has been in decades. Today’s violent crime rate is around half of what it was in 1990.

That’s not to say that all is well. Our criminal justice system is dysfunctional, overcrowded and outdated. The U.S. makes up about 5% of the world’s population but accounts for 25% of its prison population. Persons of color are still vastly overrepresented in our jails and prisons. For decades we have used prison as a one-size-fits-all solution to crime—even though we know that alternatives to incarceration work better to both reduce recidivism and prevent crime.

In Monday night’s debate, both candidates had a lot to say about crime and the role police have to play in fighting it. These are important issues. But we also need a plan to confront the broader problems affecting justice in our country.

That starts with a clear understanding of where crime is falling, where it is rising and why. Despite frightening headlines, there is little difference between overall crime rates this year and last. Violent crime is projected to rise by 5.5% in 2016—driven largely by increases in Chicago and Los Angeles. And in a dramatic illustration of just how widely crime rates can vary year-to-year, two cities that drove the national murder rate last year, Baltimore and Washington, D.C., are projected to see significant decreases this year. It’s true that murder is rising in some major cities: according to a new FBI report, the murder rate rose about 10% in 2015, and four cities accounted for 20% of that increase. As Trump noted Monday night, Chicago is one of them. We can’t ignore that. But it’s still too early to tell if this is a long-term trend.

In light of this data, premature panic on crime risks distracting politicians and voters alike from the key question in this election. What can we do to secure the gains we’ve made against crime while addressing violence where it remains?

Trump has yet to propose a way to combat crime while reforming the system—a cause that the Republican Party and its leadership, including House Speaker Paul Ryan and Senator Chuck Grassley, both support. That didn’t change Monday night. Instead, Trump doubled down on his support for New York’s controversial stop-and-frisk program, saying it “brought the crime rate way down.” The data show otherwise: after stop-and-frisk ended, New York continued to become even safer.

Clinton has openly acknowledged the need to end mass incarceration and laid out several ways she would change criminal justice policy. Yet, given the severity of the problem, now is not the time for incremental change. The situation requires bold, broad-based reform.

One such reform is to take federal funding and direct it to states and cities that bring down crime and incarceration together. Right now, there are $8 billion in federal criminal justice grants run largely on autopilot, subsidizing more arrests, more prosecutions and more incarceration, without taking measure of public safety benefits. Legislation to correct these funding incentives and refocus our policies on crime reduction—a “Reverse Mass Incarceration Act”— could improve public safety and achieve a 20% reduction in imprisonment nationwide. We know this is doable: over the last decade, 27 states have cut crime and incarceration on their own.

Other solutions recognize that we can support police, maintain public safety and build a fairer criminal justice system, all at the same time. Ask police officers, and they’ll tell you—one way to do that is by reducing incarceration for low-level offenses, giving officers the discretion to focus on violent crime.

We must also restore public trust in communities, where the bonds between law enforcement and the people they serve have frayed. Again we can turn to police officers, many of whom have already implemented “community policing” programs to bridge the divide. Repairing this fraught dynamic is crucial in the fight for a fairer, more equitable system.

And lastly, we should tackle the social ills that we know cause crime in the first place—such as structural poverty and lack of opportunity. Brennan Center reports have consistently shown that disadvantaged cities struggle the most with crime. Police agree: “You show me a man without hope, I’ll show you a man who’s willing to pick up a gun,” Chicago’s chief recently said.

Formulating and implementing sensible criminal justice policy is only possible if we understand the reality of crime, and if we accept that the system needs to be reformed. As the presidential race continues, the candidates need to do both of these things. In getting the facts straight and focusing on meaningful change, we can bring about the equality and safety the citizenry deserves. 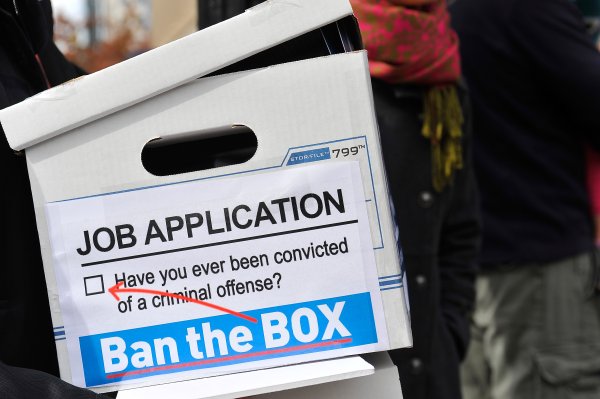 How Hiding Criminal Records Hurts Black and Hispanic Men
Next Up: Editor's Pick