Cop Pulls Over Speeding Man, Then Drives Him Over 100 Miles When He Finds Out Why He Was Going So Fast

A grieving man who was pulled over for speeding on an Ohio highway shortly after learning his 15-year-old sister was killed in a car crash, was touched when an officer offered to drive him to his destination more than 100 miles away.

Indiana-based Mark Ross convinced an acquaintance to drive him to Detroit so he could be with his family after hearing the tragic news of his sister’s death. The man had a suspended driver’s license, Inside Edition reports, but Ross, who had an outstanding misdemeanor warrant, was desperate and begged him for the lift.

Soon after setting off, the pair were pulled over by the state highway patrol. The driver was “locked up”, but Ross was offered a lift from Sgt. David Robison, an officer moved by the young man’s plight. Sgt. Robison prayed for Ross before driving him for more than 100 miles to a Detroit coffee shop, where a relative picked him up.

“I explained to the officer that my sister had died and that I needed to get to my mother ASAP,” Ross wrote in a Facebook post, which has been shared over 87,000 times. “I broke down crying and he saw the sincerity in my cry… Everybody knows how much I dislike cops but I am truly grateful for this guy. He gave me hope.”

Sgt. Robison has since been invited to Ross’ sister’s funeral, according to Inside Edition. 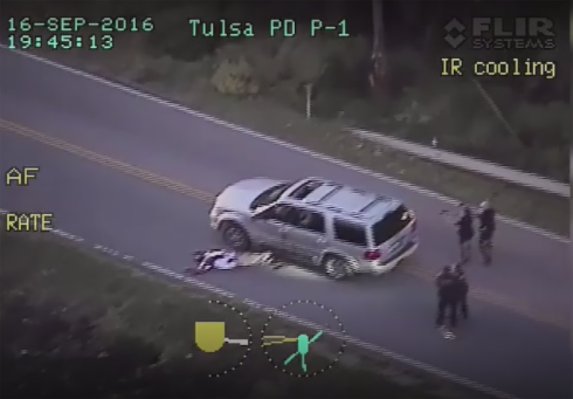 The Dangers of Being a Black Man With Car Trouble
Next Up: Editor's Pick