Who Is Alicia Machado? She Says Donald Trump Called Her 'Miss Piggy'

Donald Trump doubled down on criticism of a former Miss Universe he allegedly called ‘Miss Piggy’ on Tuesday morning, saying Venezuelan beauty queen Alicia Machado was “the absolute worst” contestant they had ever had.

“I know that person, she was a Miss Universe person and she was the worst we ever had — the worst, the absolute worst,” the Republican presidential hopeful said on a call in to the Fox & Friends studio. “She was the winner and she gained a massive amount of weight, and it was a real problem,” he added.

In last night’s presidential debate, Hillary Clinton accused Trump of treating women poorly, including claims that he had insulted Machado, 39, by calling her ‘Miss Housekeeping’ in reference to her Venezuelan heritage and ‘Miss Piggy’ when she gained 42lbs in 1997, the year after she was crowned Miss Universe aged 19. Trump did not respond to these specific allegations.

Trump, who was a partner in the company who owned the pageant at the time, also reportedly called Machado an “eating machine” and she claims he invited reporters to watch her exercise at a New York gym. In 1997, he told People that a beauty pageant winner has “an obligation to stay in a perfect physical state.”

Clinton reprimanded Trump over his alleged name-calling. “Donald, she has a name. Her name is Alicia Machado and she has become a U.S. citizen – and you can bet she’s going to vote this November,” she told him. He asked for more details about the allegation while she was speaking, but did not immediately deny it.

A few hours after the debate, Clinton’s campaign released a new video in which Machado describes the treatment she says she suffered at the hands of Trump and added he threatened to take her crown away after she gained weight. “It had turned into a circus, the joke of ‘The Fat Miss Universe’,” she says. “A joke which caused me a lot of pain.”

“Long after, I was sick with eating disorders. I wouldn’t eat, and would still see myself as fat, because a powerful man had said so.”

Machado, who now lives in Hollywood, has been supporting Clinton on her campaign trail since she became an American citizen in August – just in time to vote in the U.S. elections. “I’m a mom, I’m a student, I’m an entrepreneur. I know @HillaryClinton is our candidate,” she wrote on Instagram.

Inside Edition reports that Machado is about to sign with a major publisher to sell her memoir. 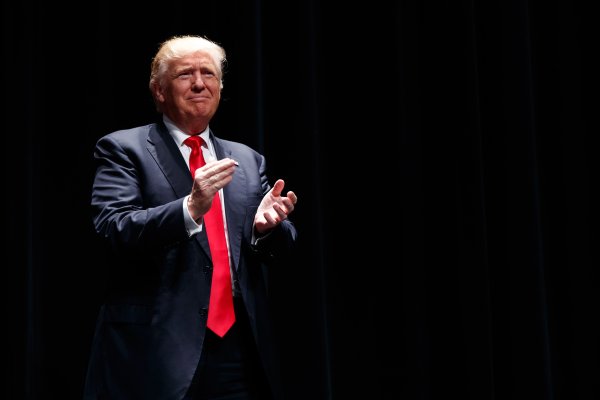 How Trump Could Legally Make Himself Richer In Office
Next Up: Editor's Pick