Donald Trump's 1973 Discrimination Case Really Was Part of Something Larger

During the first Presidential debate on Monday night, Democratic candidate Hillary Clinton asked viewers to remember that her opponent had “started his career” with a 1973 lawsuit brought by the Justice Department “because he would not rent apartments in one of his developments to African-Americans, and he made sure that the people who worked for him understood that was the policy,” as Clinton put it.

Republican nominee Donald Trump responded briefly, noting that his company’s involvement was merely part of something larger: “We, along with many, many other companies throughout the country … were sued. We settled the suit with zero—with no admission of guilt.”

It is true that there was no legal decision about whether or not the Trump Management Corporation did engage in discriminatory practices. It is also true that the case was part of something bigger.

Throughout the 20th-century civil-rights movement, housing discrimination remained one of the most intractable and important barriers to full racial equality in the United States: in the suburbs and in cities, minorities (especially black Americans) found that there were numerous barriers to their buying or renting homes. Those barriers, from restrictive covenants to redlining, kept neighborhoods segregated.

New York City had been one of the first places in the nation to ban racial discrimination in some private housing, opting in 1957—eight years after making the same decision for public housing—to implement penalties for apartment landlords who refused minorities. But, even when local laws banned such practices, they often returned in subtler forms.

In 1966, when the House introduced a bill to do the same federally, on President Johnson’s urging, it was heavy with loopholes but was still, by TIME’s reckoning back then, one of the most controversial civil-rights bills of the era. Not only did it concern private property, but it also affected the entire country, meaning that Northern whites would have to confront their own biases instead of just watching the Jim Crow South squirm. (At that point, the magazine reported, about a third of white Americans—down from 45% in 1963—told pollsters they would consider moving out of their homes if a black family moved in next door.) That bill died, but the legal justification for fair-housing laws was getting ever firmer.

Sure enough, two years later, in the wake of the assassination of Martin Luther King Jr., a new version of the law passed. It was an important step, as TIME explained:

And yet, in 1970 TIME declared that integrating housing was proving even more difficult than integrating schools. Lax enforcement of existing laws, difficulty with zoning restrictions and a federal reluctance to get involved in local matters all contributed to the problem.

One response to this situation was the direct investigation of landlord compliance with the law. One such initiative was known as Operation Open City, a federally funded project under the auspices of the New York Urban League. As an Open City report from 1967 put it, the project began in 1964—even before the federal law changed—to fight “the housing discrimination which keeps non-white New Yorkers in racial ghettos.”

Though the organization was meant primarily to help minority families directly with their moves, it was found that a “high percentage” of the people who moved with the help of Open City had to file discrimination complaints as part of the process. As one 1970 New York Times report explained, starting in 1969 the group began gathering information on many of the city’s landlords, with white “checkers” visiting buildings where black applicants had been turned away; if the white applicant was not denied, that became evidence.

In 1973, the Department of Justice decided to bring charges against the Trump Management Corporation, for violation of the 1968 law. An investigation had found evidence that minority tenants were being denied rentals at Trump properties or redirected to other Trump housing developments that were less white. The suit was at least partly a result of an investigation by Operation Open City, according to the initial New York Times report on the case. At the time, Trump called the charges “absolutely ridiculous.”

The Washington Post and others have re-investigated, in light of Trump’s candidacy, what went on in the 1970s at Trump Village and what happened during the lawsuit. According to the Post analysis, though the Trumps were always careful to make it clear that the settlement was not an admission of guilt, as the candidate said on Monday, the government portrayed the settlement as a win. “It was a big deal,” Elyse Goldweber, a former Department of Justice lawyer, told the Post.

As This American Life deftly showed in 2013, discriminatory rental practices are still very much a problem—and the tactics developed back in the 1960s are still in use, with testers posing as renters to test landlord bias. “If you’re discriminated against in getting housing, there’s a decent chance you don’t know it happened. Maybe you don’t even suspect it,” note the show’s Nancy Updike. “The whole idea seems like a throwback.” 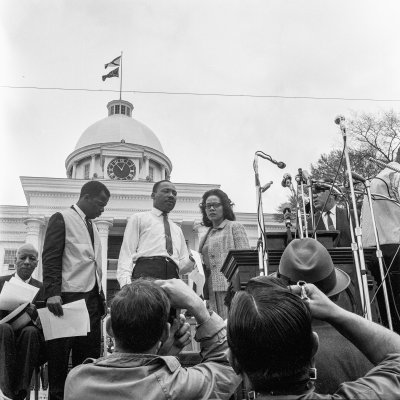 One Reason Why John Lewis Is Getting the Liberty Medal, as Told in 1965
Next Up: Editor's Pick