Why It's So Hard for Men to Debate Women

Of all the playground rules that still apply to presidential politics, “don’t hit girls” is probably the trickiest. Especially in debates, where “hitting” your rival (not literally, of course) is the whole point.

That’s why so many male candidates have floundered when they found themselves going man-to-man with a female opponent. Most voters don’t like to see women candidates get attacked or patronized by men. And since debates are often the only moments where candidates share the same physical space, the gender dynamics can be more obvious—and more precarious.

She said that while she was researching her book, Women on the Run, campaign managers told her that debates were often the trickiest minefields for a male candidate running against a female opponent.

“You have to demonstrate that you’re respectful and not belittle or demean your candidate’s accomplishments or qualifications,” she said. That can make it hard to, well, debate them.

Here are some reasons why:

Remarks can come across as patronizing. Take, for example, the 1984 Vice Presidential debates, the first national debate that included a female candidate. Then-Vice President George H.W. Bush got in hot water for explaining foreign policy to Rep. Geraldine Ferraro, the first female vice-presidential candidate for a major party. “Let me help you with the difference, Mrs. Ferraro, between Iran and the embassy in Lebanon,” he said. Ferraro retorted: “I almost resent Vice President Bush your patronizing attitude that you have to teach me about foreign policy.”

In a follow-up interview, Ferraro said she thought Bush “was kind of looking down his patrician nose at me” when he doubted her foreign policy chops. “He made the mistake of trying to kind of look down on me and give me a little bit of a lesson,” she said. “And people did not like that in him.” It was mansplaining, before that was a thing.

By contrast, then-Sen. Joe Biden avoided making a mistake during his vice presidential debate with Alaska Gov. Sarah Palin in 2008. Biden maintained an even keel by aiming most of his criticism at John McCain, rather than going after his counterpart. He never got personal (even after she started off the debate by asking if she could call him “Joe”) and he rarely focused on her own statements or policies, instead choosing to focus on McCain. The tactic worked, although the debate was not very memorable as a result.

Stunts can backfire. Look at the moment in Hillary Clinton’s 2000 run for New York Senate, when Rep. Rick Lazio approached her lectern and demanded she sign a campaign pledge. He got into her personal space, and she had to back away from him as if physically threatened. “It felt too aggressive,” said Debbie Walsh, director of the Center for American Women and Politics at Rutgers University. “I don’t know if it would have felt the same way if there were two men up there.” Many analysts say that Lazio lost the debate—and the election—in that moment.

One-liners can go sour. When Clinton ran for the Democratic nomination in 2007, and all the primary candidates were asked to say one nice thing and one critical thing about the candidate standing next to them. Sen. John Edwards went with “Um, I’m not sure about that coat,” drawing attention to Clinton’s pink jacket in a row of dark suits. The moment was clearly intended as a joke, but the voters thought it sounded sexist. Barack Obama fell into the same trap later in that primary, when Clinton was asked about why voters don’t seem to like her. “You’re likable enough, Hillary,” he interjected. It sounded condescending and dismissive, and made voters like her more.

Even off-handed comments that might seem tame when directed at a male opponent can sound sexist when said to a female one. When Sen. Bernie Sanders tried to fend off Clinton’s interruption during a Democratic primary debate with “excuse me, I’m talking,” it made the news the next day. Whether the comment was justified or not (she was, after all, interrupting) it still carried a whiff of sexism to many viewers.

Women can hit hard on sexist remarks. Ted Cruz and Jeb Bush and Marco Rubio couldn’t land a punch on Donald Trump in the GOP primary debates, but Carly Fiorina got a direct hit. When the moderator asked her what she thought about Trump’s denigrating comments about her appearance (he had said ““Look at that face! Would anybody vote for that?”) she skewered him.

“I think women all over this country heard very clearly what Mr. Trump said,” she answered drily. The reaction shot of Trump’s squirm was one of only a few moments throughout the primary when Trump was knocked off balance.

But here’s the thing about debating a female candidate: two of the five times there’s been a woman in a nationally televised presidential debate, that woman has been Clinton, and she is typically extremely prepared. Homework doesn’t always win debates—there are many deal-breaking moments that have nothing to do with preparation—but it surely doesn’t lose them. And since the gender dynamic means male candidates have to avoid direct personal hits on their opponents, the most effective strategy is often to allow female opponents to make mistakes (like Biden did with Palin) or to go head-to-head on deep policy questions (as Obama did with Clinton during the 2008 primary).

Neither scenario seems likely on Monday. But no matter how it plays out, it’s likely to be different from any of the high-profile debates between men and women so far. 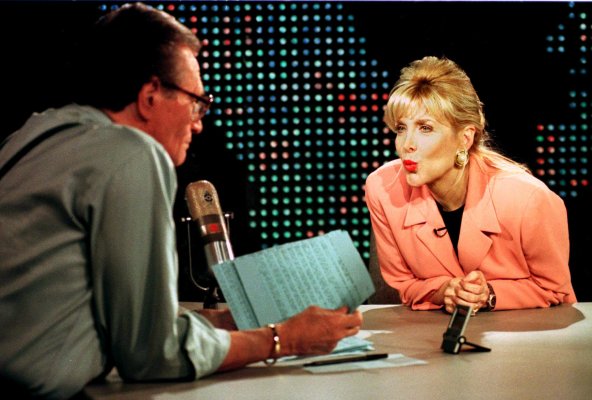