14 Times Donald Trump and Ted Cruz Insulted Each Other

Sen. Ted Cruz, R-Texas listen as Donald Trump speaks during a Republican presidential primary debate at The University of Houston in Houston on Feb. 25, 2016.
David J. Phillip—AP
By Katie Reilly

Texas Sen. Ted Cruz endorsed Donald Trump on Friday, just a couple months after he reinforced their bitter rivalry by declining to back Trump in a speech at the Republican National Convention.

Long before Cruz credited Trump with being “the only thing standing in [Hillary Clinton’s] way,” the two spent months slinging insults back and forth.

Here are some of the most memorable.

Trump: Cruz is “worse than Hillary”

Trump: “How can Ted Cruz be an Evangelical Christian’

“How can Ted Cruz be an Evangelical Christian when he lies so much and is so dishonest?” Trump tweeted on Feb. 12.

Trump: “I will spill the beans on your wife!”

“Lyin’ Ted Cruz just used a picture of Melania from a G.Q. shoot in his ad. Be careful, Lyin’ Ted, or I will spill the beans on your wife!” Trump tweeted on March 22.

As PolitiFact has noted, Trump had no evidence that Cruz was responsible for the ad that used a scantily clad picture of Melania Trump; the ad actually came from an anti-Trump super PAC.

“Donald, real men don’t attack women. Your wife is lovely, and Heidi is the love of my life,” Cruz tweeted on March 24, after Trump shared an unflattering comparison of Melania Trump and Heidi Cruz.

“It is not acceptable for a big, loud New York bully to attack my wife. It is not acceptable for him to make insults, to send nasty tweets—and I don’t know what he does late at night, but he tends to do these at about 11:30 at night, I assume when his fear is at the highest point,” Cruz said on March 24. “I don’t get angry often. But you mess with my wife, you mess with my kids, that’ll do it every time. Donald, you’re a sniveling coward. Leave Heidi the hell alone.”

“Donald Trump’s consistently disgraceful behavior is beneath the office we are seeking and we are not going to follow,” Cruz tweeted on March 25.

Cruz: “Nominating Donald Trump would be a train wreck”

“Nominating Donald Trump would be a train wreck. It would be handing the White House over to Hillary Clinton,” Cruz tweeted on March 29.

“This race is simple. Donald Trump and Hillary Clinton are both big government liberals,” Cruz tweeted on April 26.

Cruz: “This man is a pathological liar”

“This man is a pathological liar. He doesn’t know the difference between truth and lies. He lies practically every word that comes out of his mouth, and in a pattern that I think is straight out of a psychology text book, his response is to accuse everybody else of lying,” Cruz told reporters on May 3. “The man cannot tell the truth, but he combines it with being a narcissist—a narcissist at a level I don’t think this country’s ever seen. Donald Trump is such a narcissist that Barack Obama looks at him and goes, ‘Dude, what’s your problem?'”

“The man is utterly amoral. Morality does not exist for him,” Cruz added. “Donald is a bully. … Bullies come from a deep, yawning cavern of insecurity.”

“And to those listening, please, don’t stay home in November,” Cruz said on July 20 in his speech at the Republican National Convention, declining to endorse Trump. “If you love our country, and love your children as much as I know that you do, stand, and speak, and vote your conscience, vote for candidates up and down the ticket who you trust to defend our freedom and to be faithful to the Constitution.”

Cruz: “I am not in the habit of supporting people who attack my wife and attack my father”

“I am not in the habit of supporting people who attack my wife and attack my father,” Cruz said on July 21, after declining to endorse Trump in his convention speech.

“What does it say when you stand up and say, ‘Vote your conscience,’ and rabid supporters of our nominee begin screaming, ‘What a horrible thing to say,'” Cruz said. “If we can’t make the case for the American people that voting for our party’s nominee is consistent with voting your conscience, is consistent with defending freedom and being faithful to the Constitution, then we are not going to win and we don’t deserve to win.”

Trump: “He may have ruined his political career” 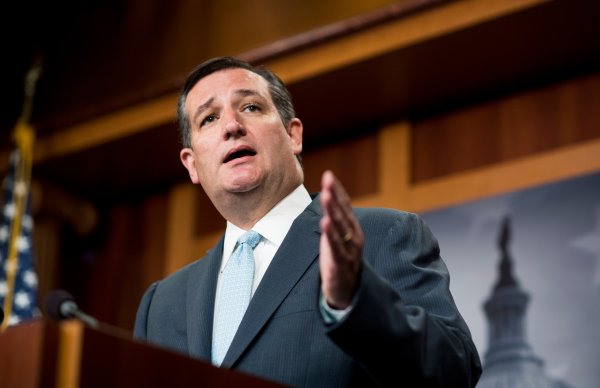