Size aside, the monstrous iPhone 7 Plus’ dual camera system is the most important characteristic setting it apart from its smaller sibling, the iPhone 7.

Because the iPhone 7 Plus has two lenses, one standard and one telephoto, it’s able to produce crisper zoomed-in shots. And there’s more: The iPhone 7 Plus will soon add another feature called Portrait Mode, which Apple unveiled during its iPhone 7 launch event earlier this month. It’ll come solely to the larger iPhone 7 in a software update later this year.

Portrait Mode adds a depth effect that makes images in the foreground appear sharp against a slightly blurred background, as shown in the images below. Photographers call this effect “bokeh.” It’s commonly used in portrait photography to isolate subjects from their backgrounds.

Smartphones haven’t traditionally been able to make photographs like these because of their hardware limitations. But the iPhone 7 produces a Bokeh-like effect by using both of its camera lenses in combination with machine learning software that separate the foreground from what’s behind it.

Portrait Mode hasn’t yet officially arrived on the iPhone 7 Plus. But an early, unfinished version of it is present in Apple’s latest beta software release, iOS 10.1, which I’ve had the chance to briefly experiment with. Below are some sample images and thoughts:

When using the iPhone’s default camera app, you’ll find the Portrait Mode button located just above the shutter button, along with the iPhone’s other capture modes. Once your iPhone is set to Portrait, the camera will analyze the scene and try to apply its depth-of-field effect to a subject. You’ll see a preview in the camera viewfinder before capturing the shot. The camera won’t apply the depth effect unless the conditions are just right.

If the lighting is too dim or if you’re too close or far from your subject, the camera will alert you so you can adjust accordingly. That’s because these factors play a big role in determining how noticeable the depth effect will be in the resulting image. The further a subject is from what’s in the background, the more pronounced and sharp it looks compared to the rest of the photo. If a subject is too dim, you run the risk of capturing a grainy shot.

In my experience, these warnings appeared most often when I was trying to shoot indoors. While using this mode, you can still tap the screen to focus on a specific subject and adjust the exposure as normal. The iPhone captures two images when Portrait mode is turned on: one with the depth effect applied, and one without it.

Features like Portrait Mode aren’t likely to replace DSLR-quality photos anytime soon, but it does give smartphone photographers more tools in their toolkit. HTC also released a similar feature for its One M8 phone back in 2014, but hasn’t revived this capability on any of its newer handsets.

For now, Portrait Mode works best when used outside in natural lighting while photographing a subject against a far-off background. The popularity of photo-editing apps like Instagram, VSCO, and Snapseed show that there’s huge demand for anything that improves smartphone photos. It’s nice to see Apple build more features like these directly into the iPhone’s camera system. 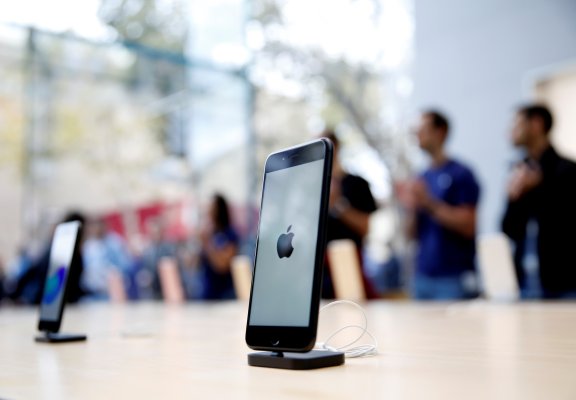 Apple Thinks You're Tired of Using Your Fingers to Control Your Phone
Next Up: Editor's Pick