Here's What Happens When a Crime Is Committed On a Plane

Angelina Jolie and Brad Pitt at the TCL Chinese 6 Theatres on Nov. 5, 2015 in Hollywood.
Michael Kovac—Getty Images
By Alex Fitzpatrick

Federal authorities are weighing an investigation into reports of actor Brad Pitt’s actions toward his children while on board a private plane, raising some interesting questions about aviation law. Specifically: Which country gets jurisdiction when a crime occurs, or is suspected to have occurred, aboard an airplane flying over the sea and outside any one country’s airspace, as it reportedly was in Pitt’s case?

To answer that question, TIME turned to Brian F. Havel, Associate Dean for International Affairs at DePaul University College of Law and director of the International Aviation Law Institute. Havel pointed us to the Convention on Offences and Certain Other Acts Committed on Board Aircraft, more commonly known as the Tokyo Convention. First entering into force in 1963, the Tokyo Convention in part governs questions of jurisdiction regarding crimes committed on board aircraft flying internationally.

“Jurisdiction is explicitly provided to the state in which the aircraft is registered,” Havel wrote in an email. He added that the Convention also allows countries to claim jurisdiction in a broad range of other scenarios, including when a crime has been committed by or against a citizen of a given country.

“The simplest take-away is that the state of [the aircraft’s] registration, the state of the offender, and the state of the victim are the likeliest players for on-board crimes such as thefts or assaults,” Havel said. “Though crimes with broader consequences for the safety of the flight or national security may authorize jurisdiction by other targeted or affected states.”

Havel added: “As you can see, the available states which can claim jurisdiction is actually quite broad.” So what happens if one country claims jurisdiction and another wants to do the same? “Extradition treaties will be in play if other states want to assert their right of jurisdiction,” he said.

In Pitt’s case, we’re not sure where the aircraft was registered. A search of Federal Aviation Administration records for potential aircraft came up empty—the aircraft may have been chartered, or is registered to an unknown owner. But Pitt’s American citizenship would appear to give U.S. authorities jurisdiction instead of, say, the French, despite the plane’s origin point of Paris. 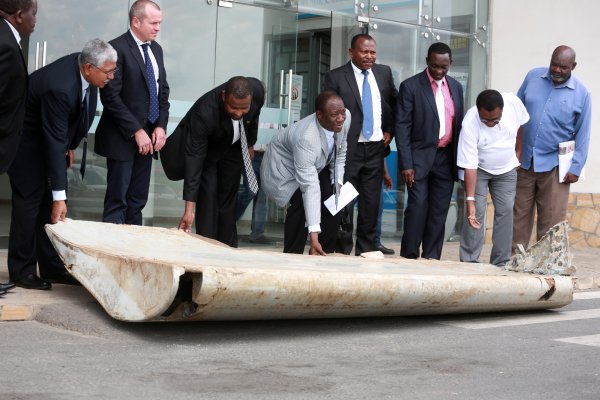 Another Piece of MH370 Has Been Identified
Next Up: Editor's Pick