When Gary Johnson, the former Governor of New Mexico and the 2016 Libertarian candidate for president, was asked in an interview about getting onto the debate stage with Hillary Clinton and Donald Trump, he gave a pretty unorthodox response.

NBC News’s Kasie Hunt asked Johnson whether he thought he could pull even with the Democratic and Republican presidential candidates if he had the opportunity to debate them.

“I do,” he responded, adding, “And it wouldn’t have anything to do with my debate performance, either. It would just be that people would recognize that there’s another choice and that there would be an examination of me and [Vice Presidential candidate] Bill Weld as who we are and what we’ve done and not based on that.”

Then Johnson bizarrely stuck his tongue between his teeth. “I think I could stand up there for the whole debate and not say anything,” he mumbled, before adding something incomprehensible.

The Libertarian candidate recently drew some bad headlines when he asked an interviewer, who had inquired about the crisis in the Syria city of Aleppo, “And what is Aleppo?” Soon after, #WhatisAleppo began trending on Twitter, with many users shocked by (or making fun of) the presidential candidate’s basic question. 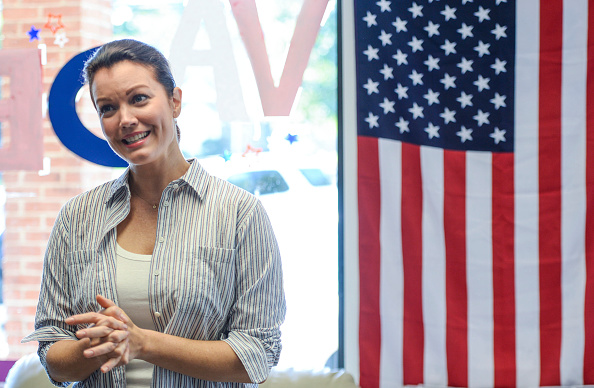 Hollywood Stars Hit the Campaign Trail for Clinton
Next Up: Editor's Pick