Dramatic footage of a young Syrian girl’s rescue from the rubble following an airstrike emerged on Friday, the latest in a string of videos highlighting the human toll of war on civilians in the rebel-held areas of Aleppo.

The video obtained by Sky News shows men, including rescuers from the White Helmets, pulling the girl out of a pile of concrete in the city’s Bab al-Nairab district. She begins to wail as he digs around her body, removing pieces to free her. Moments later the footage cuts to a scene of a man cradling the girl as he races her into a van.

Sky News reported the girl, identified as five-year-old Rawan Alowsh, was the only survivor of her family after the airstrike. TIME could not independently verify that. Activists on the ground said the airstrike, which came on the second day of a new offensive by the Syrian military, was conducted by Syrian or Russian aircraft.

Footage like this is a daily occurrence in Aleppo, which is divided between government and opposition forces. Activist media networks, nurses and doctors frequently share wrenching scenes following airstrikes and barrel bomb attacks in the sections of the city controlled by the opposition.

In August, video footage showing the rescue of five-year-old Omran Daqneesh after an airstrike went viral. He sat dazed and silent in the back of an ambulance as others were pulled from the rubble. The boy lived but his 10-year-old brother, Ali, died from his injuries. 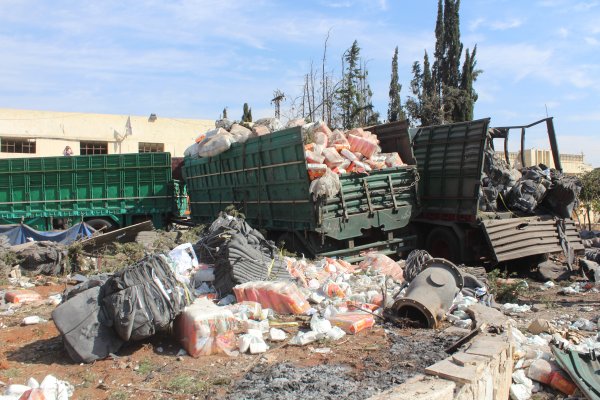 Witnesses Describe Attack That Broke the Syria Truce
Next Up: Editor's Pick