Three Men Have Been Indicted in New York City Over 'a Huge $4.5 Million Ivory Haul'

Three salesmen were indicted Thursday on two counts of illegal commercialization of wildlife, according to a statement released by the New York County District Attorney’s Office.

The charges related to a $4.5 million haul of allegedly illegal ivory seized from an antiques shop in midtown Manhattan, including carvings and elephant tusks up to 7 ft. long.

Undercover officers from the New York Department of Environmental Conservation purchased a carving from the shop, Metropolitan Fine Arts & Antiques, in November 2015. The salesman claimed it was made from mammoth tusk, but a subsequent inspection revealed it to be ivory, the district attorney’s statement said.

Upon returning with a search warrant, department officials allegedly found 126 articles of ivory, including two pairs of whole tusks worth more than $150,000 each.

“As the international elephant population hovers near extinction, too many ivory traders continue to profit from the slaughter of these beautiful, defenseless animals,” Manhattan District Attorney Cyrus R. Vance Jr. said.

The illegal wildlife trade is worth between $7 billion and $23 billion annually, according to figures from the U.N. and Interpol. A recent census showed the population of African savanna elephants dropped 30% over the past seven years, primarily because of poaching. The survey said there are just over 352,000 of them left.

A strict law was passed in New York State in 2014, making the illicit trade in endangered animal by-products a felony.

The confiscated ivory will be publicly destroyed at the Ivory Crush event on World Elephant Day 2017. 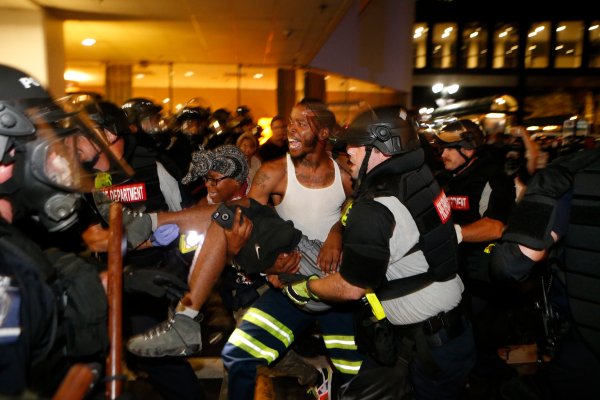 Man Shot During Charlotte Protests Has Died
Next Up: Editor's Pick