‘I am deeply sorry that we failed to fulfill our responsibility,’ said John Stumpf, chairman and CEO of Wells Fargo, in a Senate hearing on its massive, multiyear customer fraud
Tom Williams—CQ-Roll Call/Getty Images
By Massimo Calabresi

For the enemies of big banks, it was a dream come true. John Stumpf, the CEO of what until recently had been the most valuable bank in the world, Wells Fargo, sat alone under the bright lights of a Senate hearing on Sept. 20, meekly receiving a three-hour public flogging–from industry-friendly Republicans, no less. Pennsylvania’s Pat Toomey, who is up for re-election, called the bank’s behavior “unbelievable” and “deeply disturbing.” The committee’s GOP chair, Richard Shelby of Alabama, broke out Watergate language: What did Stumpf know, and when did he know it?

The outrage was real. On Sept. 8, government officials revealed that Wells had opened more than 2 million bank and credit-card accounts for customers without their permission from 2011 through 2015, resulting in $2.6 million in unwarranted fees for tens of thousands of unsuspecting clients. Wells–once the poster child for banking prudence–agreed to pay $185 million in penalties, while exasperated Senate critics wondered what it would take to reform the industry. Massachusetts Democrat Elizabeth Warren offered her opinion to a visibly uncomfortable Stumpf: “The only way that Wall Street will change is if executives face jail time when they preside over massive frauds.”

Stumpf had built the bank’s much admired success on a business strategy that fostered such fraud. “Cross-selling,” or pushing account holders to open new accounts with Wells, was his pride and joy. On quarterly earnings calls in recent years, Stumpf had touted his company’s success with the tactic. The markets responded by boosting the company’s stock by $30 per share. The value of Stumpf’s personal holdings jumped by $200 million.

Behind the ever rising ratios of “products per household,” investigators found, was a boiler-room atmosphere of “excruciatingly high pressure” to boost numbers. Regional bosses set daily quotas for tellers and personal bankers, requiring them to stay late and work weekends or risk being fired. One whistle-blower, Yesenia Guitron, allegedly told managers in 2008 that the pressure was driving employees to open new accounts. Wells’ management learned of the problem in 2011, according to investigators. But when the city of Los Angeles raised concerns in 2013, Wells said it didn’t give customers any accounts or services they didn’t need, the city’s deputy attorney testified.

It was only after a 2013 Los Angeles Times article that the bank admitted to its regulators that there was an issue, investigators found. Over time, Wells fired some 5,300 employees and claimed to be rooting out the problem. “This type of activity has no place in our culture,” Stumpf testified. But the cross-selling push continued until the day of the settlement in early September. Worse, even as talks were under way, Stumpf and the bank’s board gave a lavish retirement package to the executive in charge of community banking, Carrie Tolstedt, who walked away with $124.6 million in stock and options.

Stumpf told Senators, “We never directed nor wanted our team members to provide products and services to customers that they did not want.” The Justice Department has reportedly issued subpoenas and begun a criminal probe. U.S. federal prosecutors are vying for the right to go after the bank, and the Office of the Comptroller of the Currency is weighing penalties for managers. Democratic staffers on the Hill have discussed the unlikely prospect that special powers could be triggered, allowing regulators to break up Wells. Meanwhile, GOP staffers and their allies at other banks are as angry at Wells as anyone. They say the revelations, coming amid the current populist atmosphere, have at least temporarily derailed efforts to roll back the Dodd-Frank act, which imposed new oversight rules on Wall Street. As for rolling back bad behavior there, says Richard Cordray, head of the powerful but politically embattled Consumer Financial Protection Bureau, which imposed $100 million of the federal fine on Wells, “it’s a big project to change the culture at the banks.” 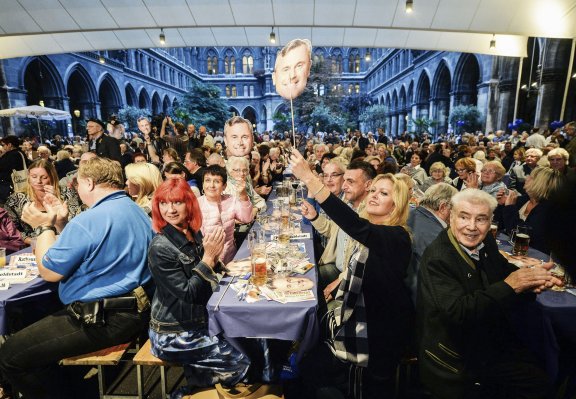 European Politics Are Swinging to the Right
Next Up: Editor's Pick