Russia’s on a roll. It has blocked Ukraine’s turn to the West and claimed Crimea as a trophy. Finger-wagging Europeans are struggling with refugees, Brexit, populism, terrorism and a dozen chronic problems. Nervous Americans fear that Russian cybermasters will steal their secrets and manipulate their elections. Washington has reluctantly embraced Moscow as a needed military partner in the Middle East. Western sanctions, low oil prices and a weak economy haven’t diminished President Vladimir Putin’s 82% approval rating–which is why his United Russia party just won a resounding victory in parliamentary elections.

But Russia has an important long-term problem, and it isn’t just its slowing economy. China is an increasingly serious challenger in regions that Russians consider part of their sphere of influence. It is not the West that will limit the expansion of Russian influence and prestige. It is China.

Dynamic and diversified China has huge amounts of money to invest across Eurasia, and countries in the region will benefit from the money in coming years to build roads, bridges, ports, schools and growth-bolstering communications infrastructure. China, not Russia, is Central Asia’s top trade partner and biggest lender. Its new Silk Road initiative is opening new markets for Chinese goods and extending Beijing’s political influence.

Russia has tried to keep Central Asia within its orbit through membership in Putin’s Eurasian Union, a project designed to rebuild Russian dominance throughout as much former Soviet territory as possible. Kazakhstan was a founding member, though a reluctant negotiating partner whenever Moscow has tried to extend the union’s jurisdiction from commerce to politics and security.

No surprise there. Russia’s economy is not simply in recession; it’s in decline. Russia can’t dominate the region with its military, and it has no ideological appeal for anyone who doesn’t need its backing. Even Russian voters are tuning out. The size of United Russia’s win on Sept. 18 owes much to very low turnout.

China and Russia have a common interest in limiting U.S. security and economic dominance, but all China really needs from Russia is raw materials, and China has long since begun to diversify its sources for everything Russia sells. Add Europe’s realization that it needs new energy sources, and China can continue to drive a hard bargain on prices at a time when Russia badly needs new commercial opportunities.

When the Russian-Chinese partnership reaches its natural limits, the two nations’ historic mistrust will again dominate the relationship. That reality will be a lot tougher on Russia than on China. 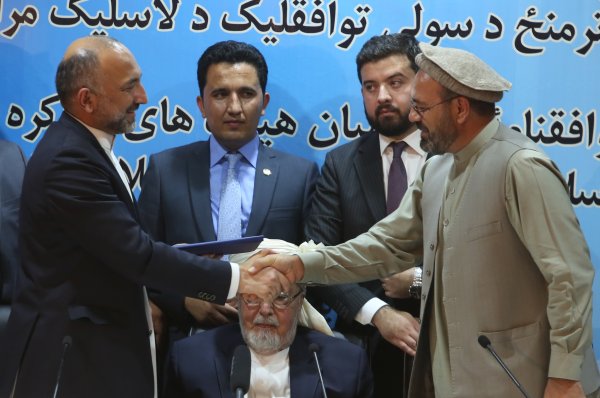 Afghanistan Signs Peace Deal with 'Butcher of Kabul'
Next Up: Editor's Pick