What a Terrorist Acting Alone Says About the Loyalty of U.S. Muslims

A weekend that began with three bombs in New York and New Jersey, plus a knife attack at a Minnesota mall, ended with a far more encouraging sight on Monday morning: the burly figure of Ahmad Khan Rahami, huddling against the elements in the entrance vestibule of Merdie’s Tavern in Linden, N.J.

The rain came down in sheets, and Rahami was the most wanted man in America, his name chirped to every smartphone and television screen in greater New York by an NYPD alert: “Wanted”–for the explosion in Manhattan’s Chelsea neighborhood on Sept. 17, a second device that failed to detonate three blocks away and another that did, earlier the same day, along the route of a Marine Corps charity run on the Jersey Shore.

Miraculously, given the planning and ball bearings that went into the bombs, none produced death or even an injury that kept anyone in the hospital longer than overnight. On Sept. 18, a backpack stuffed with pipe bombs was found at an Elizabeth, N.J., commuter-railway station, apparently abandoned by a suspect who had nowhere to run and, with nearly every TV screen in America showing his picture, nowhere to hide.

This counts as good news. When the young jihadists who carried out the terrorist attacks on Paris fled that city, they melted into an underground of sympathetic neighbors in a Muslim ghetto at the very heart of Europe–the Molenbeek neighborhood in Brussels. There, the most wanted man in Europe hid out for four months before he was finally discovered blocks from his family home.

Where was Rahami’s sanctuary? He was, in the end, alone. At home, his father had described the Afghan immigrant as a terrorist to police two years earlier, prompting an FBI inquiry that ended inconclusively. The tavern doorway where the son took refuge stands just 13 miles from Jersey City, where Republican presidential candidate Donald Trump (falsely) claimed that “thousands and thousands” of American Muslims cheered the collapse of the Twin Towers 15 years ago. New Jersey’s Muslim population, at 3%, is as high as that of any state in America. Yet Rahami had to sleep on the street.

His arrest there after just 50 hours at large demonstrates how much a would-be attacker is up against in a country newly transfixed by terrorism: surveillance cameras, instant forensics and a coordinated security apparatus that, with that text announced by a civil-defense alarm, can instantly deputize the entire public. “This,” said NYPD Commissioner James O’Neill, “is the future.”

Maybe so. But note also the present. America’s roughly 3 million Muslims make up barely 1% of its inhabitants. They include scattered malcontents and militants who turn violent. But extremists are clear outliers in a population striking for its aspiration and assimilation. A 2011 Pew Research Center report shows that Muslims are almost exactly as likely to call their faith important (69%) and to worship weekly (47%) as U.S. Christians. A majority say life is better in America than in Muslim countries. With 6 of 10 born abroad, Muslims become U.S. citizens at a far higher rate (70%) than other immigrants (47%). And though many report unwelcome friction since 9/11, Muslims are more than twice as likely as other Americans to say things are going well in the country.

It becomes clear why Rahami, like the Boston Marathon bomber Tamerlan Tsarnaev, was apparently radicalized on long visits overseas, in countries where Muslims who have never been to the U.S. believe it is at war with Islam. The belief took hold when, after dispatching the Afghanistan regime that had sheltered Osama bin Laden, the U.S. invaded another Muslim country, Iraq, which was uninvolved in the Sept. 11 attacks.

Driving Muslims and Westerners apart–erasing what it calls “the gray zone” of coexistence–is a stated goal of ISIS, which took credit for the Sept. 17 knife wounding of 10 people in St. Cloud, Minn., by a Somali immigrant who was then killed. It’s a strategy of purposeful alienation that former senior CIA officials say Trump’s campaign actually plays into by opposing Muslim immigration or comparing Syrian refugees to Skittles. But given Muslims’ embrace of America and Rahami’s lonely flight, it doesn’t seem to be going so well. 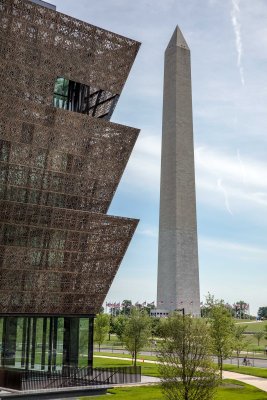 A Museum Embraces the Triumph and Struggle of Black America
Next Up: Editor's Pick