Jared Leto to Star as Andy Warhol in Biopic

Jared Leto is tackling one of the most iconic artists of the 21st century.

EW has confirmed the Suicide Squad star has signed on to star in and produce a biopic of Andy Warhol, the legendary pop artist whose critiques of celebrity and consumerism turned him into a household name (as well as guaranteeing that no one will ever think of a Campbell’s soup can in the same way again).

Leto will produce the biopic, titled Warhol, along with Michael De Luca (The Social Network). Wolf of Wall Street scribe Terence Winter is writing the script based on the Victor Bockris book Warhol: The Biography.

In the early 1960s, Warhol introduced the world to pop art, turning his eye toward soup cans, cola bottles, and celebrities like Elvis Presley and Marilyn Monroe. His studio, “The Factory,” immediately became one of the hottest spots on the 1960s New York cultural scene, and Warhol himself became a celebrity, known for haunting clubs like Studio 54. (In 1968, another artist shot and almost killed him.) Warhol was only 58 when he died in 1987.

This isn’t Warhol’s first portrayal on the big screen, of course, and countless actors have played the artist, from Guy Pearce in Factory Girl and David Bowie in Basquiat to Crispin Glover in The Doors and Bill Hader in Men in Black 3.

Leto’s next project is Denis Villeneuve’s untitled Blade Runner sequel, which is set for release on Oct. 6, 2017. No word yet on what sort of weird, Warhol-esque gifts Leto will send his costars. (Soup cans? Bananas? An original Warhol painting? We wouldn’t put it past him.) 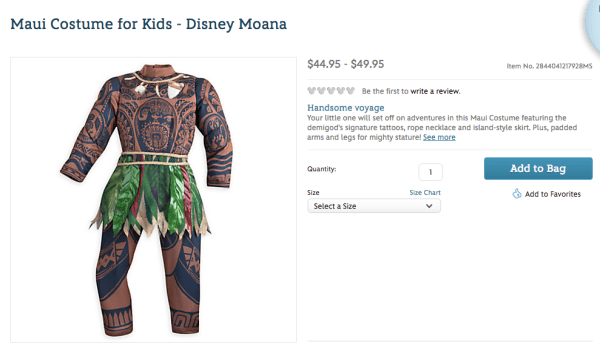 The Internet Isn't Happy About This Moana Halloween Costume
Next Up: Editor's Pick